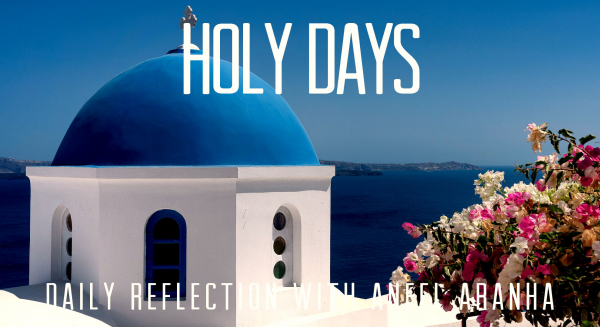 One Sabbath Jesus was going through the grainfields, and his disciples began to pick some heads of grain, rub them in their hands and eat the kernels. Some of the Pharisees asked, “Why are you doing what is unlawful on the Sabbath?” Jesus answered them, “Have you never read what David did when he and his companions were hungry? He entered the house of God, and taking the consecrated bread, he ate what is lawful only for priests to eat. And he also gave some to his companions.” Then Jesus said to them, “The Son of Man is Lord of the Sabbath.”

One of the Ten Commandments is a reminder to keep the Sabbath day holy. The Jewish celebration of Sabbath (Shabbat) begins at sundown on Friday evening and lasts until sundown on Saturday. Christians, however, go to church on Sunday instead of Saturday to honor the day Christ rose from the dead. Isn’t this breaking the law? Not if you realize that the Sabbath was for the Jews. Christians, however, acknowledge the need for this “holy day” and thus kept it on a Sunday for reasons already stated.

Now, in the Middle East, where I have lived for many years, the weekly day of worship is not Sunday as it is in the rest of the world, but Friday, because that is the weekly holiday in the region. If the services were on Sundays, most Christians would not be able to attend them because working hours are long, and work pressures are immense. Consequently, a dispensation has been given to move the “weekly day of obligation” to Friday.  Isn’t THIS “breaking the law”?

It is, but then Jesus taught us a few lessons about law breaking. Human needs take priority over observances of the law. And by meeting human needs on a “holy day”, the commandment is fulfilled, not abolished. If we understand this, we will understand what Jesus meant when he said he had come to fulfill the law, not to abolish it (see Matthew 5:17). Jesus said, “The Sabbath was made for man, not man for the Sabbath” (Mark 2:27). Which basically meant that the Sabbath was meant to help people not burden them.

But it had become a burden to people, with so many rules they had to follow. Once, when Jesus had delivered a woman on the Sabbath, the synagogue leader said to the people, “There are six days for work. So come and be healed on those days, not on the Sabbath.” And Jesus scolded him, “You hypocrite! Don’t you untie your ox from the stall and lead it out to give it water? So, should not this woman, whom Satan has kept bound for eighteen long years, be set free on the Sabbath day from what bound her?” (See Luke 13:10-17).

Like the Pharisees, we too appear to have gotten stuck on rules for a lot of things, and they often seem to take precedence over common decency. I don’t want to generate controversy by providing examples, but I think if we keep the things we reflected upon today in mind, we will become a church that is more Jesus-like than Pharisee-like. And what a beautiful church that would be. Don’t you think?

Oh, and by the way, for the real Christian, every day of the week should be a holy day.