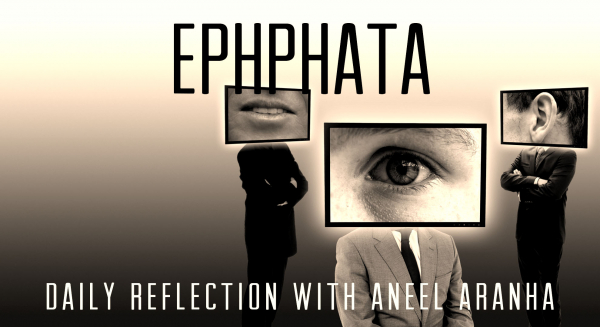 Then Jesus left the vicinity of Tyre and went through Sidon, down to the Sea of Galilee and into the region of the Decapolis. There some people brought to him a man who was deaf and could hardly talk, and they begged Jesus to place his hand on him. After he took him aside, away from the crowd, Jesus put his fingers into the man’s ears. Then he spit and touched the man’s tongue. He looked up to heaven and with a deep sigh said to him, “Ephphatha!” (which means “Be opened!”). At this, the man’s ears were opened, his tongue was loosened and he began to speak plainly. Jesus commanded them not to tell anyone. But the more he did so, the more they kept talking about it. People were overwhelmed with amazement. “He has done everything well,” they said. “He even makes the deaf hear and the mute speak.”

This is one of my favorite stories that I speak about often. In this story Jesus goes into the region of the Decapolis. It is a pagan country, but it is a sign of how Jesus’ fame has spread that people flock to him for healing. Some people brought to him a man who was deaf and dumb, and they asked Jesus to lay his hand on them and heal him.

What does Jesus do? He sticks his fingers into the man’s ears, then spits onto his hands and touches the man’s tongue! Isn’t that gross? Would you stand for it if you went to your priest or pastor and asked him to pray for you; instead, he does what Jesus just did. You’d have thought him to be crazy, right? But this is what Jesus did and one has to ask the question, “Why?” He could have placed his hand on the man and healed him as he did on several occasions. Actually, he didn’t even have to do this. He only had to say the word!

So, again, why? Because he wants us to understand that he will heal us on his terms not ours. Very often we go to Jesus for healing seeking this on our terms, but it isn’t gonna happen. It’s gonna happen the way God wants it to happen. Consider the story of Naaman, the Syrian, who had leprosy. He went to Elisha expecting, as in this story, for the prophet to lay his hand on his head and heal him. Elisha told him to go dunk himself seven times in a muddy river. Naaman was outraged, but one of his soldiers persuaded him to do what he was told to. And he was healed.

Would he have been healed if he hadn’t done what the prophet asked? Probably not. Would this man who was deaf and dumb been healed if he had stepped back in horror at Jesus’ extremely unorthodox methods? Again, probably not; at least not at that moment. Anyway, Jesus did what he did and then said the words “Ephphata” which means ‘Be opened!’. And immediately the man’s ears were opened, and his tongue loosened, and he began to speak.

Now, here is something that might surprise you. There is a good chance that when you were baptized the priest touched your ears and tongue and said the word, “Ephphata.” What’s the significance? It’s a way of saying, “May your ears be opened to the word of God. And may your lips declare the word of God that you heard.” The commission to proclaim the good news began then.

Ephphata. May your heart be open too.