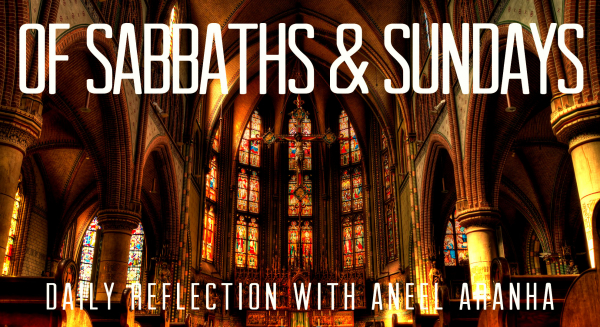 On another Sabbath he went into the synagogue and was teaching, and a man was there whose right hand was shriveled. The Pharisees and the teachers of the law were looking for a reason to accuse Jesus, so they watched him closely to see if he would heal on the Sabbath. But Jesus knew what they were thinking and said to the man with the shriveled hand, “Get up and stand in front of everyone.” So he got up and stood there. Then Jesus said to them, “I ask you, which is lawful on the Sabbath: to do good or to do evil, to save life or to destroy it?” He looked around at them all, and then said to the man, “Stretch out your hand.” He did so, and his hand was completely restored. But the Pharisees and the teachers of the law were furious and began to discuss with one another what they might do to Jesus.

One of the questions I sometimes get asked is why Christians meet on Sunday, instead of Saturday, which is the traditional Sabbath. I thought it might be a good idea to answer this question because it can come up at anytime and it would be helpful to know why. In the story of creation we find God taking a day of rest after six days of creating the world. This formed the basis of the Sabbath, which was to be a day of rest for us too, and all Jews faithfully observed it.

The Sabbath, however, is a sign of the Mosaic covenant. God has made several covenants over time and on each occasion he gave us a sign to help us remember the covenant. You will remember the sign of the rainbow he gave Noah. The sign of circumcision he gave Abraham.  With Moses it was the Sabbath (see Exodus 31:12-17). The first thing we need to understand is that we are not living under the Mosaic covenant anymore so we don’t need to observe the Sabbath anymore! So it’s not like we have moved the Sabbath from one day to another; we just don’t observe it.

Now, today we are living under a new covenant in Christ’s blood. Jesus gave us the sign of this new covenant at the Last Supper: his body and blood. Then he died and rose again on the third day which is a Sunday. This came to be known as the Lord’s Day and was set aside for him which is the simple reason why we meet on Sunday.

Several times in the Book of Acts we find the early Christians meeting for prayer on the Lord’s Day. Before the turn of the century, this had become a universal practice adopted right across the church and it is a practice we continue to this day. However, there is a downside to this practice. A lot of Christians believe that if they meet for prayer on Sunday, that is enough. It isn’t. We should worship the Lord at all times. If you had somebody you loved dearly, would you set aside an hour in the week for him or her and say that will do?

And the other downside is that the rule becomes important, not the purpose behind it. It is what happened to the Pharisees. They were so fixated on following the observance of the Sabbath, they totally lost the plot. There was a man who was sick who had the chance to be healed, and they didn’t want him to be healed because it was the Sabbath. We can see the absurdity of this, but unfortunately we can be similarly blind when it comes to our own failings.