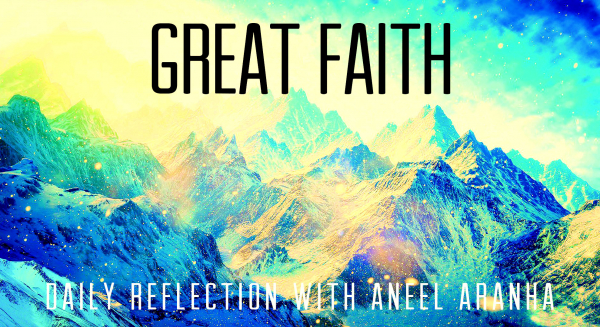 When Jesus had finished saying all this to the people who were listening, he entered Capernaum. There a centurion’s servant, whom his master valued highly, was sick and about to die. The centurion heard of Jesus and sent some elders of the Jews to him, asking him to come and heal his servant. When they came to Jesus, they pleaded earnestly with him, “This man deserves to have you do this, because he loves our nation and has built our synagogue.” So Jesus went with them. He was not far from the house when the centurion sent friends to say to him: “Lord, don’t trouble yourself, for I do not deserve to have you come under my roof. That is why I did not even consider myself worthy to come to you. But say the word, and my servant will be healed. For I myself am a man under authority, with soldiers under me. I tell this one, ‘Go,’ and he goes; and that one, ‘Come,’ and he comes. I say to my servant, ‘Do this,’ and he does it.” When Jesus heard this, he was amazed at him, and turning to the crowd following him, he said, “I tell you, I have not found such great faith even in Israel.” Then the men who had been sent returned to the house and found the servant well.

We often hear Jesus berating people for having “little faith”, so when he says somebody has “great faith” we have to take note. So, what made the Centurion’s faith so great? We can get a few answers from this passage itself but let us first look at the behavior of the Jewish elders whom the Centurion sent to Jesus. Notice how they try to cajole him into visiting the Centurion’s house. “You know, this is a good guy. He does a lot for us. He built a synagogue. So, you gotta do this, man.” Do our prayers sometimes sound like this?

Anyway, this isn’t what I want to talk about today, but do think about it. I wanna talk about great faith. What was great about the centurion’s faith? It comes from the qualities the man shows. First, his humility. He cares about his slave, in a culture where they were less than animals. He also tells Jesus he is not worthy to have him enter under his roof. This needs to be understood. Jews considered themselves defiled if they went to a Gentile’s home. Obviously, the Centurion didn’t know Jesus didn’t care about such things, but it showed his concern about the inhibitions Jesus may have.

Second, he believed that Jesus had authority. Used to power, himself, he knew how that worked, and he was confident that what Jesus commanded would be done. It was an incredible declaration of faith, especially when contrasted with the Jews who knew him, had seen the miracles he had performed, yet had difficulty in believing in him. We are not very different. We know the promises that Jesus had made us, assuring us of so many things, yet we do not believe that he will honor his word.

Third, he believed that Jesus had power and this power could extend over space. He didn’t need to be physically present with the sick man for him to be healed. Quite obviously only God could do something like this, and even though most of the Jews would never accept, even after his death and resurrection that Jesus was God, this pagan knew who he was. Little wonder Jesus was impressed.

How do we fare in comparison? Are we like the Centurion, approaching Jesus in humility, totally confident in who Jesus is and his ability to work miracles? Or are we people of “little faith”? Jesus said, “So I tell you, whatever you ask for in prayer, believe that you have received it, and it will be yours” (Mark 11:24).