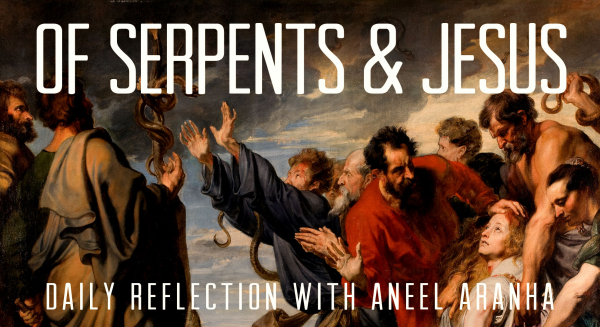 No one has ever gone into heaven except the one who came from heaven —the Son of Man. Just as Moses lifted up the snake in the wilderness, so the Son of Man must be lifted up, that everyone who believes may have eternal life in him.” For God so loved the world that he gave his one and only Son, that whoever believes in him shall not perish but have eternal life. For God did not send his Son into the world to condemn the world, but to save the world through him.

Today’s passage contains the famous verse John 3:16, but as we have reflected upon this several times, let us consider another verse. “As Moses lifted up the snake in the desert, so must the Son of man be lifted up, so that everyone who believes in him may have eternal life.” Is Jesus really comparing himself to a snake? Well, that can be pretty shocking, I know, but it all makes sense once we understand the meaning of both events.

First event first. During the Exodus from Egypt to the Promised Land, Edom had denied the Israelites permission to cross its land on their way to Canaan. God told Moses not to fight but to go around. Forgetting everything the Lord had done for them up until that point, the people started to grumble. “Why have you brought us up out of Egypt to die in the wilderness? There is no bread. There is no water. And we detest this miserable food.” As a result, the Lord sent fiery serpents among the people as judgment.

The people acknowledged their sin and asked Moses to pray for forgiveness. God told Moses to make a bronze serpent and put it on a pole. Everyone who had been bitten would live if they looked at the serpent. This might sound very strange, considering God’s commandment not to make any graven images, but it proves a few points that we will look at another time. In any event, those who looked at the serpent lived. And years later, Jesus would say what he did.

Now there are five important things to note about what happened in the wilderness. One, the people committed sin which led to death. Two, God provided the remedy for the curse. Three, this remedy had to be lifted up. Four, the only thing the sinful people needed to do was to look in faith and what God had given them as a remedy. And five, the result was life. Now if we look at the story of Jesus we see an exact replication of this.

One, the wages of sin is death. Two, God provided the sacrifice of his son as the remedy. Three, Jesus was lifted up from the dead. Four, all we need to look upon him in faith expressed through repentance and baptism. And five, we have eternal life. So, does it all make sense now? As a reminder of this, the next time the priest holds up the host during the consecration, keep your eyes on it all the time it is raised; you can bow your head when he does.