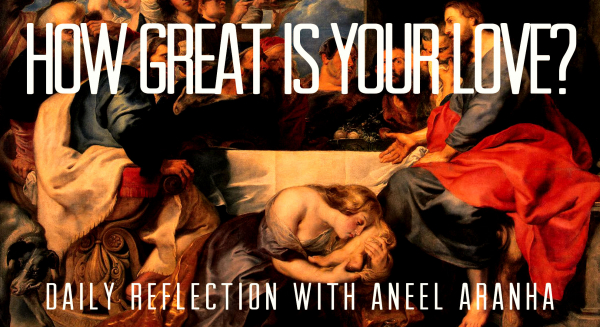 When one of the Pharisees invited Jesus to have dinner with him, he went to the Pharisee’s house and reclined at the table. A woman in that town who lived a sinful life learned that Jesus was eating at the Pharisee’s house, so she came there with an alabaster jar of perfume. As she stood behind him at his feet weeping, she began to wet his feet with her tears. Then she wiped them with her hair, kissed them and poured perfume on them. When the Pharisee who had invited him saw this, he said to himself, “If this man were a prophet, he would know who is touching him and what kind of woman she is—that she is a sinner.” Jesus answered him, “Simon, I have something to tell you.” “Tell me, teacher,” he said. “Two people owed money to a certain moneylender. One owed him five hundred denarii, and the other fifty. Neither of them had the money to pay him back, so he forgave the debts of both. Now which of them will love him more?” Simon replied, “I suppose the one who had the bigger debt forgiven.” “You have judged correctly,” Jesus said. Then he turned toward the woman and said to Simon, “Do you see this woman? I came into your house. You did not give me any water for my feet, but she wet my feet with her tears and wiped them with her hair. You did not give me a kiss, but this woman, from the time I entered, has not stopped kissing my feet. You did not put oil on my head, but she has poured perfume on my feet. Therefore, I tell you, her many sins have been forgiven—as her great love has shown. But whoever has been forgiven little loves little.” Then Jesus said to her, “Your sins are forgiven.” The other guests began to say among themselves, “Who is this who even forgives sins?”

Jesus said to the woman, “Your faith has saved you; go in peace.” How much do you love Jesus? If you said you love him a lot, then you would show this love by doing a lot, because that’s what you do when you love somebody greatly. Take a look at what this woman in this story did and contrast it with what Simon the Pharisee did and see which of them closer describes your own attitude and behavior towards Jesus. But first let me tell you what happened so you get an idea of what’s going on.

Simon was a Pharisee who invited Jesus home for dinner. The dinner is not entirely private. It’s like you inviting a famous preacher who is in town for a meal but although you don’t advertise it, you leave the doors open for whoever wants to walk in and listen to the man talk. Most of the time people do this for the prestige of the thing rather than because they really want to hear what the preacher has to say. I should know.  Anyway, the problem with having an open house is that anybody can walk in, and sometimes you might not like the people who walk in.

Simon has a guest he would rather not have, a woman who was a “sinner” and although her sin is not specified, most people imagine her to be a prostitute so let’s go with that. It works as well as anything else. She had heard that Jesus was going to be there, so she goes to listen to him, and the stuff brings tears to her eyes. Now she is sitting so close to Jesus some of them fall on his feet, and this triggers a huge bout of weeping that make his feet wet with tears. She wipes them with her hair, then anoints them with some very expensive perfume.

Simon and undoubtedly all his other guests are scandalized. He thinks: “This man can’t be a prophet. If he was, he’d know what kind of a woman this is!” Jesus knows what he is thinking, and he could let the matter go because the man hasn’t voiced his opinion loudly, but he won’t. There is an important lesson to be taught here. He tells Simon a story about two debtors one who owed a large sum of money to a certain creditor; another who owed a much smaller sum. Both were forgiven their debt. Who would love the creditor more? Simon gave the obvious answer: the one who was forgiven more.

And then Jesus said, “You know Simon. I entered your house, and you gave me no water for my feet, but this woman bathed my feet with her tears. You gave me no welcoming kiss when I entered but this woman has not stopped kissing my feet. You did not anoint my head with oil, but this woman has anointed my feet with perfume. You know why she has done all this? Because her sins were many and she has been forgiven much so her love is great.  But to the one whom little is forgiven, loves little.” If you believe that you have been forgiven little you will love little. So now listen.

There is not a single person in the world who has been forgiven little because every one of us has sinned greatly against God. And once we understand this, we will love God a lot.