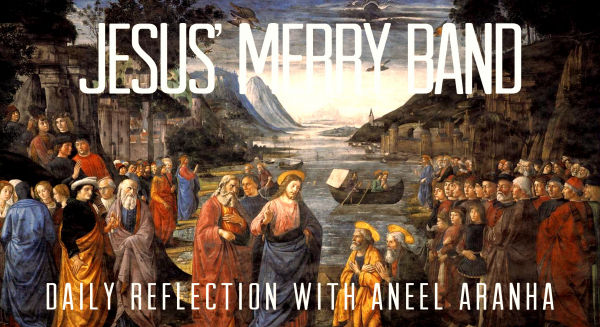 After this, Jesus traveled about from one town and village to another, proclaiming the good news of the kingdom of God. The Twelve were with him, and also some women who had been cured of evil spirits and diseases: Mary (called Magdalene) from whom seven demons had come out; Joanna the wife of Chuza, the manager of Herod’s household; Susanna; and many others. These women were helping to support them out of their own means.

I have loved the idea of time travel and if I had a machine that allowed me to do that, I know exactly the time and place I would want to travel to. It would be about AD32, the second year of Christ’s ministry. I would, of course, want to be among his merry band of followers moving through cities and villages, as he proclaimed and brought the good news of the kingdom of God.

Can you imagine what that would been like? Marching into a town and watching the farmers leave their fields, the women leave their daily chores, the children leave their play to come to listen to this man from Galilee that they had all heard about and hoped to see. And here he was, talking to them on the shores of a river, or on a hill side, or in a meadow. And the way he spoke, filling their hearts with hope and joy, as he spoke about heaven and all that awaited them there.

And it wasn’t just what he said, it was what he did as well. People who were crippled and bedridden were walking again. People who were oppressed and demonized were set free. How amazing he was. And how amazing to be with him. And who were with him. So many. We often don’t realize that there was a huge entourage that followed Jesus. There were the twelve apostles, of course: Peter, and James, and John, and the other nine. But there were a whole lot of women too.

We hear about them today. There was Mary Magdalene. There was Joanna, who was the wife of Chuza, who was Herod’s steward. There was Susanna. And many others. It is astounding that Jesus allowed women to travel as a part of this team. This is unheard of in ancient history, and undoubtedly scandalized everybody. There was never any hint of sexual immorality in his team, however, and Jesus would have ensured it remained so by his constant denunciations of such immorality.

And these women, not only served Jesus—I am guessing they generally managed to keep everything in order; most men are terrible at that—but they also provided monetary assistance to his ministry. I am certain that they also served in various other capacities, especially ministering to the women who came to Jesus, counseling them, and encouraging them. The men would not have been permitted to do that.

Well, there isn’t a time travel machine to let us go back and walk with Jesus through the Galilean countryside, but we can still follow Jesus today. Let’s go!