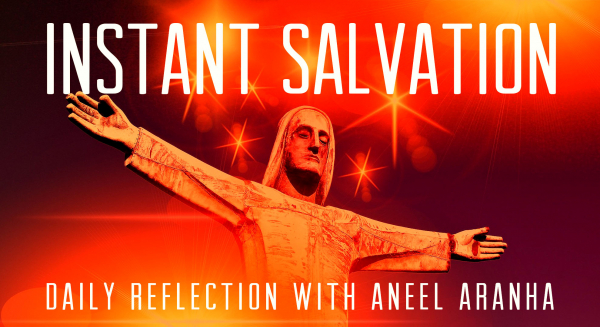 While a large crowd was gathering and people were coming to Jesus from town after town, he told this parable: “A farmer went out to sow his seed. As he was scattering the seed, some fell along the path; it was trampled on, and the birds ate it up. Some fell on rocky ground, and when it came up, the plants withered because they had no moisture. Other seed fell among thorns, which grew up with it and choked the plants. Still other seed fell on good soil. It came up and yielded a crop, a hundred times more than was sown.” When he said this, he called out, “Whoever has ears to hear, let them hear.” His disciples asked him what this parable meant. He said, “The knowledge of the secrets of the kingdom of God has been given to you, but to others I speak in parables, so that, “‘though seeing, they may not see; though hearing, they may not understand.’ “This is the meaning of the parable: The seed is the word of God. Those along the path are the ones who hear, and then the devil comes and takes away the word from their hearts, so that they may not believe and be saved. Those on the rocky ground are the ones who receive the word with joy when they hear it, but they have no root. They believe for a while, but in the time of testing they fall away. The seed that fell among thorns stands for those who hear, but as they go on their way they are choked by life’s worries, riches and pleasures, and they do not mature. But the seed on good soil stands for those with a noble and good heart, who hear the word, retain it, and by persevering produce a crop.

A few years ago, I was invited to preach a retreat in Calcutta and, as I often do, I lived with the priests who invited me. The parish priest was a wonderful man named Fr. Jose and he used to make me a cup of coffee every morning. Although it was instant coffee, there was nothing instant about how he made it. He would mix the coffee and sugar together with a teaspoon of warm milk and stir it until it became a smooth chocolate paste, and only then, about five minutes later, would he add hot milk to it for a coffee that was awesome. It is the only way I drink instant coffee now. You should try it.

So, what’s this gotta do with anything? Plenty, because you see, life is like this. We can make it more flavorful by taking some time and effort, or we can just swallow what is given to us. Not surprisingly this mentality has worked its way into our spiritual lives too, and all we want is instant stuff. Quick fixes. And many preachers are happy to cater to this because it translates into greater numbers, which in turn translates to greater earnings. Let’s not even pretend there aren’t people to whom religion is a business.

But even those who aren’t mercenary like to play the numbers game. So, everything is targeted at appealing to the masses. Consequently, many preachers have become expert in manipulating emotions as they totally water down the need for Christian commitment, inviting people at the end of their sermon for instant healing, instant deliverance, or even instant salvation.

You would have heard, of course, of the famous altar call that is issued after the preacher has done his talking and how hundreds of people accept it. I keep hearing about how millions of people are accepting Christ as their savior in Africa, but are they really? They all come forward after an emotionally charged crusade, giving their lives to Jesus, only to abandon him a few days later, or worse, put him together with their old gods because nobody told them that when it came to Jesus, it was all him or nothing.

In today’s parable we hear about four types of soil describing four types of hearts. Three of them are unresponsive to the seed being sowed, and although Jesus explained the reasons for this, there is another reason why some soil doesn’t bear a harvest. The seeds are fake. And those who preach a watered-down gospel or a gospel that proclaims a message contrary to what Jesus gave have to take responsibility. They will be called to account.

Let us be careful who we listen to so we can bear the harvest God wants us to bear.