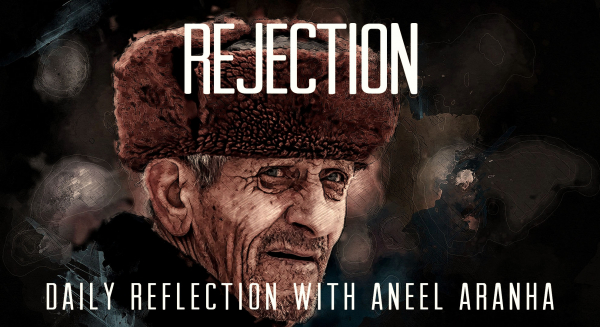 As the time approached for him to be taken up to heaven, Jesus resolutely set out for Jerusalem. And he sent messengers on ahead, who went into a Samaritan village to get things ready for him; but the people there did not welcome him, because he was heading for Jerusalem. When the disciples James and John saw this, they asked, “Lord, do you want us to call fire down from heaven to destroy them?” But Jesus turned and rebuked them. Then he and his disciples went to another village.

People who follow Jesus get rejected a lot. I remember when I came to Jesus about 17 years ago, I lost practically all my friends overnight. They couldn’t figure me out anymore. People who SERVE Jesus get rejected a lot more. Now, we might act like it doesn’t bother us, but come on, if you have ever been rejected — and, of course, you have — by anyone for any reason you know that it hurts. So, rejection hurts. I’m sure it hurt Jesus too.

In our story today, his disciples get a taste of rejection. Jesus had sent them ahead of him into a Samaritan village to get things ready for him, but the people there did not welcome him. James and John, known for their temper — Jesus had nicknamed them Sons of Thunder (see Mark 3:17) — they wanted to call fire down from heaven to destroy them. Wow! Could they have actually done that? Quite possibly, yes. They were beginning to discover they could do a lot of cool stuff.

But Jesus rebuked them. We don’t know what he said, but knowing Jesus and his mission, he probably told them that he hadn’t come to destroy people, he had come to save them. He wasn’t there to inflict wounds; he was there to heal them. And in this is a lesson for all of us, especially those who serve God. We don’t react in anger; we react in love, hard though it might be, and realize that in time God might do something to vindicate us. I have seen that happening in my life more times than I can count.

Look at what happened here, for instance. We see the disciples returning much later to Samaria and achieving a considerable measure of success (see Acts 8). So, you see, waiting helps. Peter might have provided a theological explanation about this in one of his letters. He wrote: “The Lord is not slow in keeping his promise, as some understand slowness. Instead, he is patient with (us), not wanting anyone to perish, but everyone to come to repentance” (2 Peter 3:9).

In the meantime, what do we do? Let us take consolation from what Jesus said, “Whoever listens to you listens to me; whoever rejects you rejects me; but whoever rejects me rejects him who sent me” (Luke 10:16). They are not rejecting us; they are rejecting God. And God will ensure they get their due. However, and this is what I really want to say to you today, let us not pray for retribution, but mercy instead. And in doing this we will show ourselves to be true children of God.

As for the pain, it might help to remember that Jesus went through it too. And he didn’t deserve it at all.