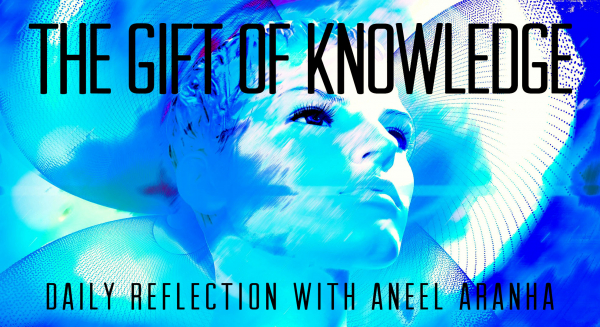 When Jesus saw Nathanael approaching, he said of him, “Here truly is an Israelite in whom there is no deceit.” “How do you know me?” Nathanael asked. Jesus answered, “I saw you while you were still under the fig tree before Philip called you.” Then Nathanael declared, “Rabbi, you are the Son of God; you are the king of Israel.” Jesus said, “You believe because I told you I saw you under the fig tree. You will see greater things than that.” He then added, “Very truly I tell you, you will see ‘heaven open, and the angels of God ascending and descending on’ the Son of Man.”

In his letter to the Corinthians, Paul speaks about nine amazing gifts that the Holy Spirit gives the believer to build up the church. These are wisdom, knowledge, discernment, faith, healing, miracles, prophecy, tongues, and the interpretation of tongues. In today’s passage, we find Jesus using the gift of knowledge. This is a gift by which the Spirit gives a person a deeper understanding of a mystery of faith, or specific knowledge about a person or situation that could not be known, unless God revealed it.

Jesus told Nathaniel that he had seen him sitting under the fig tree a little while earlier, even though Jesus had been nowhere near the area at the time. On another occasion, Jesus stopped by in Samaria for a drink of water and engaged in a conversation with a woman who had come to draw water from the well. He knew that she had five husbands (cf. John 4:18-19) without her having spoken of it.

The gift of knowledge operates by faith and is received in one’s spirit, not intellect or emotions. It may be shared with the person to whom it is related and is an invaluable asset in the ministry of counseling. The gift can be used for a variety of other purposes too. It helps to reveal sin as in the case of Ananias and Sapphira (cf. Acts 5:1-10), and in the case of King David (cf. 2 Samuel 12:1-10).

The gift can be used to encourage as it encouraged Elijah when he heard God’s voice in the mountain (1 King 19:9-18). It can be used to impart knowledge of future events, as Agabus came to know about a great famine that would sweet over the entire world (Acts 11:28). It can also be used to reveal hidden things—or hidden people—as Samuel located Saul who had tried to conceal himself among baggage! (cf. 1 Samuel 10:22).

This gift, like the others which are often known as the charismatic gifts, or the gifts of manifestation, are available to every believer. Paul encourages us to “follow the way of love and eagerly desire gifts of the Spirit, especially prophecy” (1 Corinthians 14:1). He speaks a lot about these gifts in his letter to the Corinthians You will find them in Chapter 12 and according to him, each believer has already received them.

So, which gift do you have?