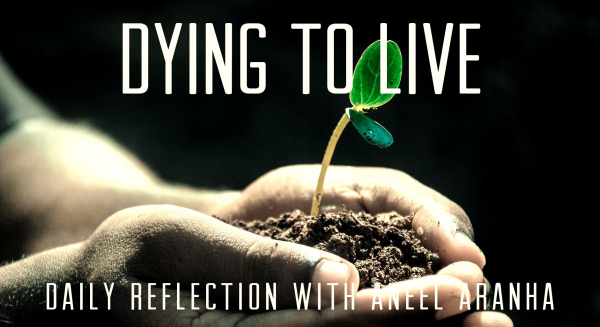 Jesus said to his disciples: "Amen, amen, I say to you, unless a grain of wheat falls to the ground and dies, it remains just a grain of wheat; but if it dies, it produces much fruit. Whoever loves his life loses it, and whoever hates his life in this world will preserve it for eternal life. Whoever serves me must follow me, and where I am, there also will my servant be. The Father will honor whoever serves me."

A few years ago I’d gone to Lebanon on mission and one of the sessions I conducted was with drug addicts in a rehab center. I spoke about God’s love, and then led them in what turned out to be a very anointed time of ministry. I could sense God moving very powerfully, delivering most of the guys there of their addictions while filling them with his love. Before concluding I told them that when they left rehab to share the love they had experienced with others, especially those who hurt others.

I explained that the reason we hurt other people is because we were hurting ourselves. If that hurt was healed, and God’s love could heal our wounds, we would be very different people.  I told them to even consider going into Syria, where Daesh were killing people by the thousands. “Take God’s love to them,” I said. There was an old man sitting at the back of the church who seemed to be getting very agitated. I found out why as we were leaving. He was the gatekeeper and as we drove out he stopped out car, told us to roll our windows down, and looking right at me he said.

“Some muslim leaders tell their young men to go out and kill people while they sit at home out of harms way. You are like them. You tell our young men to go face them knowing it might mean their deaths while you sit at home out of harms way.” I didn’t say anything. When I got back home, I went to God and said, “What was that all about?” He said, “Aneel, you are a very brave man. You go to countries and speak about things they could put you in jail for. But you haven’t been to a place where they can cut your head off for what you say.”

“What are you saying?” I asked. “You want me to go to Syria?” And he said, “Yes.” There was no hesitation. I immediately made preparations to go to Syria. Of course, everybody got very upset. A week later somebody asked me: “Aren’t you afraid that you will die there?” Without thinking I replied, “Why should I be? In Christ I am already dead.” Later on, when I thought about it I realized how true that statement was.

Paul write: “Do you not know that all of us who have been baptized into Christ Jesus were baptized into his death? Therefore we have been buried with him by baptism into death, so that, just as Christ was raised from the dead by the glory of the Father, so we too might walk in newness of life. (Romans 6:3-4). This newness of life —everlasting life — is being born again. But to be born again, we have to first die, no? It took me a few months to fully comprehend this, but it set me free in a manner that I cannot even begin to describe.

May you be free too. Die to live. Forever.