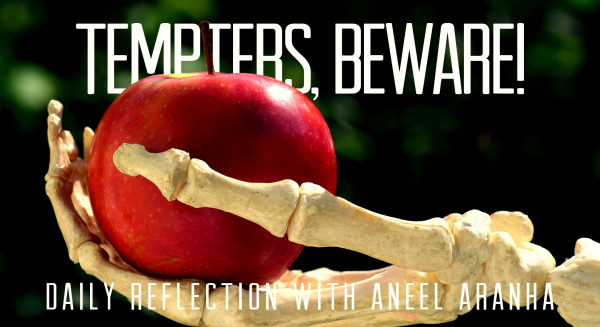 Jesus said to his disciples: “Things that cause people to stumble are bound to come, but woe to anyone through whom they come. It would be better for them to be thrown into the sea with a millstone tied around their neck than to cause one of these little ones to stumble. So watch yourselves. If your brother or sister sins against you, rebuke them; and if they repent, forgive them. Even if they sin against you seven times in a day and seven times come back to you saying ‘I repent,’ you must forgive them.” The apostles said to the Lord, “Increase our faith!” He replied, “If you have faith as small as a mustard seed, you can say to this mulberry tree, ‘Be uprooted and planted in the sea,’ and it will obey you.

I had the choice of talking about three things today. One, the fate of tempters. Two, the need to forgive. Three, the desire for increased faith. What should I talk about? Actually, for me, it became pretty obvious. A few weeks ago, I was tired and decided to watch something on TV. I have a Netflix subscription, so I tuned in to one of the TV series, and a few minutes into the first episode, I was exposed to full frontal nudity and explicit sex.

Now, I am not a prude, and I won’t pretend I have not seen things like this before, but what upset me was that it was on everyday TV where anybody, including little children, could see it and be exposed to things they really shouldn’t be exposed to at all. Especially not at an impressionable age. Sure, they are warnings about coarse or crude language, sexual content, and violence, but come on, is a minor child going to understand these warnings?

And, yes, there are parental controls that one can set on these channels, but how many parents do this? And even if one does, how does one control what a child watches in somebody else’s house? I find it very distressing that we can see sex and violence so freely now. And that it is often gratuitous, shown even when there is no need for it, to draw audiences. Now, I believe adults can decide to do whatever they want, but children should be protected.

And there are consequences. Forget about the temporal consequence of damaging the child’s psyche; we bring about some pretty severe retribution. Listen to what Jesus says again: “It would be better if a millstone were hung around your neck and you were thrown into the sea for you to cause one of these little ones to stumble.” So what do we do? Well, you know what Jesus said about cutting off our hands and gouging out our eyes if they cause us to sin (see Matthew 18:8-9).

Well, can you imagine the steps we would need to take to protect others from temptation, especially kids? Eliminate the sources of temptation. Throw out your TV if necessary. And if you really can’t do without it, cancel your subscriptions to any channels that show unholy — there’s no other word for it — content. And the media might wisen up if they see they are losing revenue by offering these things, instead of gaining it as they currently are).

And we might also protect them from a fate worse than being thrown into the sea with millstones around their necks.