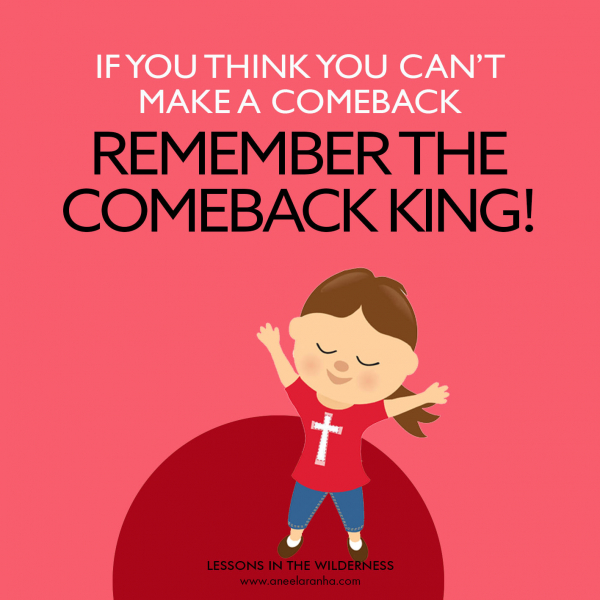 There’s a famous saying that goes: “The bigger they are, the harder they fall.” It’s true. We constantly hear about superstars in the entertainment business, and powerful and influential men and women in other industries suddenly come crashing down from pinnacles of fame and success in spectacular fashion. Bada boom! However, falling isn’t the exclusive domain of the rich and famous. We all fall.

Fortunately, most of us are not prominent enough for our falls to be noticed by many. However, our falls can be equally terrible. Failing in an important exam. Going out of business. Being imprisoned for a crime. Getting way over our heads in debt. Having to file for bankruptcy. Such failures can be demoralizing and devastating, tempting us to give up on life. How many people have thrown themselves off bridges, or swallowed sleeping pills, or blown their brains off when things have gone wrong!

Don’t do it! Don’t give up! It doesn’t matter how low we have sunk or how badly we have fallen; we can always make a comeback. If we need evidence of this, we only have to look at the comeback king of all time: Jesus!

When he rode into Jerusalem, the people thronged the streets, welcoming Jesus as their king. A few days later, these same people thronged the streets again, only this time they were jeering, not cheering, as he was stripped naked and hung on a cross to die. When he was laid in a tomb, his enemies thought the story was over (as did most of his friends), but the story was only just beginning. Three days later, Jesus was up and about again, resurrected from the dead.

His comeback resulted in comebacks for all of us who believe. Spiritually dead, he brought us back to life. How can we doubt for an instant that someone who can do this cannot bring us from failure to success? Nearly every hero in the Bible has failed at some point, but God raised them up, even higher than before. He will raise us too.

So, enough of the pessimism and morbidity and other negative rubbish you have been feeding yourself with. Declare with Paul: “I am hard-pressed on every side, but not crushed; perplexed, but not in despair; persecuted, but not abandoned; struck down, but not destroyed” (2 Corinthians 4:8-9).

And if you like famous sayings, there’s another one that goes: “The harder you fall, the higher you bounce!” This isn’t gonna work if you jump off a building. But this will most certainly work if you put your faith in God.

So, trust God and bounce back higher!