Be Slow To Judge 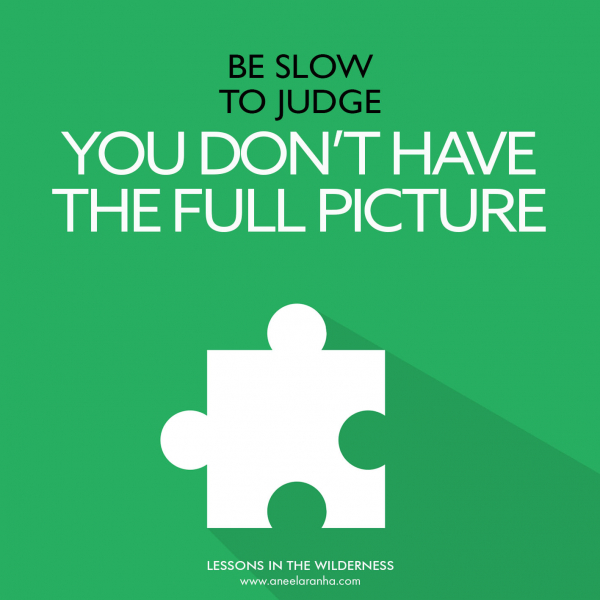 During one of my missions several years ago, I was invited to minister to a group of youngsters. They began the session with prayer, and at one point, each one took turns thanking God. When it was her turn, a lovely girl who had come for the first time was very effusive in thanking God for her eyes. She went on and on about how beautiful they were and how grateful to God she was for them, and I couldn’t help thinking she was incredibly vain.

It appeared that I wasn’t the only person who felt that way because I noticed quite a few eyeballs rolling. After the meeting, the group leader remarked about it, saying he had never heard anybody thanking God for their eyes so effusively before. He was polite enough, but it was a blatant dig.

The girl was not stupid. She knew she was being chastised. In a very soft voice, she said the reason she was so effusive in her gratitude for her eyes was because she was going blind. For a long moment, there was pin-drop silence as everyone froze in shock. We all left the meeting having learned a lesson that we would never forget.

We shouldn’t be too quick to judge.

We can never really know why people say what they say or do what they do. We can’t read their minds, and we can’t see what’s in their heart. But we judge, nonetheless. For instance, consider the way we look at addicts. Isn’t it with disdain, even contempt? Addictions are often a by-product of deep wounds suffered, a mental illness that has not been successfully treated, a traumatic childhood, or one of several hundred other reasons. The addict finds solace in alcohol, drugs, or sex. They provide a brief respite from constant pain. If we had gone through what they had gone through, we might be in their position today. While this does not condone what they do—an addict’s actions are often damaging to others—understanding that they might not have as much control over their lives as “normal” people do might make us more sympathetic toward them.

Therefore, we should be slow to judge, although if we were to pay heed to Jesus, we shouldn’t judge at all! Why? Because even “normal” people have their vulnerabilities and give in to their weaknesses on occasion. Don’t we? And I am sure we would not like to be judged by others.

Make sense? If it does, please pass this message around. Click one of the social media buttons below.