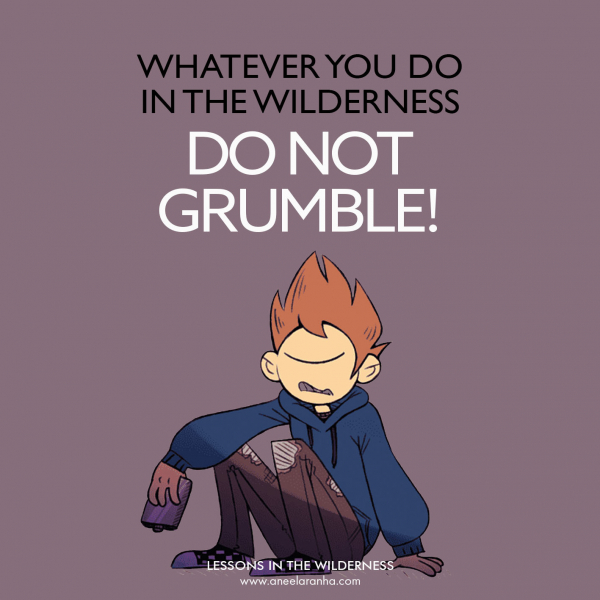 Grumbling is a very natural response to difficult situations. We all tend to grumble when we are in difficulties, even little ones like getting stuck in a traffic jam. Who hasn’t grumbled when forced to take a detour? However, it becomes dangerous when we start grumbling against God. Why? Because it stems from a lack of belief in him.

What was the result? A trip that should have taken 11 days took 40 years! Talk about taking detours! Their grumbling showed a lack of faith in God and his promises, a direct consequence of forgetting the amazing things that God had done for them, and an abysmal lack of gratitude. They even turned to other gods!

We may be guilty of making the same mistakes. When we are tossed into the wilderness, a euphemism for difficult times, we can become extremely bitter and angry and grumble about how badly God has let us down. Or, we can remember all the wonderful things that God has done for us in the past and be grateful for them. We can also be thankful for the time in the wilderness, which is time we get to be with God and learn some new things that he has to teach us. These reflections are a testimony to that.

Despite all this, however, God never left their side. And he let them know it! He appeared as a pillar of cloud during the day and a pillar of fire during the night. When they were hungry, he sent food down from heaven. When they were thirsty, he had water pour of a rock. He kept their clothes intact. And although it took a long time to get out of the desert, get out they did.

I know what it feels like to be stuck in the wilderness. It’s pretty terrible, and it seems interminable. Even if we don’t grumble, we can be in it for a long time. That’s because God has his reasons, and they are good ones. So, bear up the best you can, smile through the tears, and pray to God to take you through it quickly. Pray also for the grace to cope with it until he does.

And never forget he is with you. “How can I know that?” you ask. “I don’t see any pillars of cloud or fire!” Well, you’re reading these reflections, aren’t you? Aren’t they pillars of hope and encouragement?