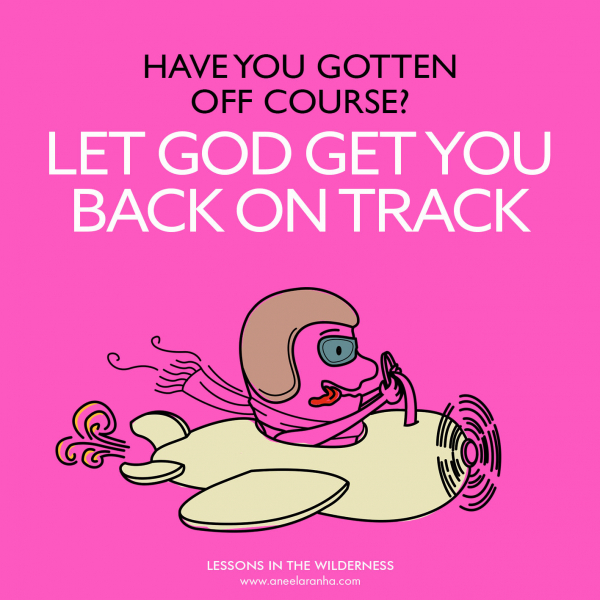 You may not realize this when flying to your destination, but your plane is off course at least 90 percent of the time! Bad weather, air pockets, wind turbulence, and other factors cause it to keep veering off track. The pilot, however, receives constant feedback from air traffic control that allows him to make the necessary course corrections, so you arrive at your destination safely, and hopefully on time.

Life is like that. We go off course much of the time. And even though we receive feedback continuously from the Holy Spirit, who works like an air traffic controller, we often don’t heed his instructions. What’s the result? We get way off track and are in danger of landing at the wrong destination! No prizes for guessing where that is!

Fortunately for us, we have a God who wants us to end up in the right place, so he allows situations to occur in our lives that persuade us to alter course. As an example of extreme persuasion, consider Jonah (see Jonah 1-4).

Jonah was a prophet of God who had his own ideas about how things should be done. One day, God told Jonah to preach repentance to the Ninevites. However, Jonah detested the Ninevites and didn’t want them to be saved! So, not only did he refuse to obey, he headed off in the opposite direction! But God had plans for Jonah (just like he has plans for us), and he wasn’t about to let Jonah blow them.

But how does one deal with somebody so determined not to listen? You force him to listen! A storm hit Jonah’s ship. When Jonah told his fellow travelers he was the reason for the storm, they promptly tossed him overboard! A fish swallowed Jonah, and it took three days of stewing in its belly before Jonah finally decided to alter course and head in the right direction! And not only was Jonah saved, so also was an entire nation!

God doesn’t want us to suffer, but his main concern is that we shouldn’t suffer for eternity. So, sometimes he will permit things to happen to bring us to our senses. Look at what happened to that young man who left home with his father’s fortune (see Luke 15:11-24). He ended up in a pigsty, broke and broken. What a terrible thing! But it made him return home. What a wonderful thing, no?

So, dear friend, if you happen to be going through something unpleasant at the moment, don’t be discouraged or despondent. Consider that God might be getting you to correct course. Do this, and things should get right as rain again!