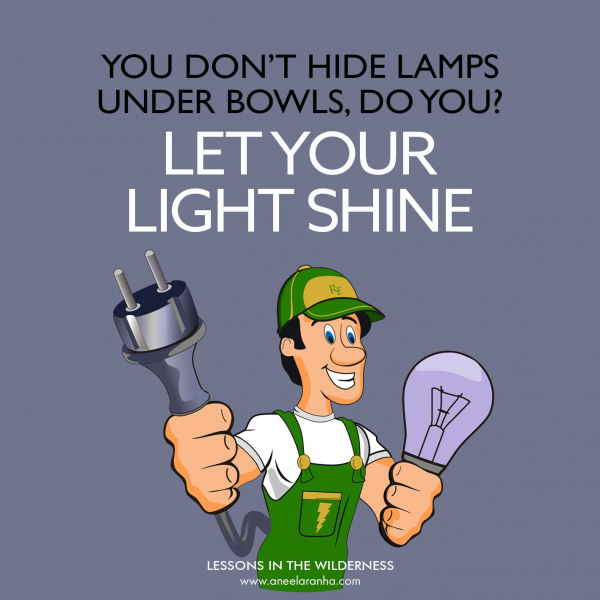 We have all been blessed with beautiful gifts by a very generous God, but unfortunately, many of us don’t use them, or if we do, not quite enough. We are afraid that we are not good enough and will fail, but the real failure is not trying. Besides, it is only when we start doing something—and doing it often!—that we become good at anything or achieve success. It took Edison 10,000 attempts before he invented the electric bulb!

When we don’t use our talents, we deprive the world of something wonderful. Can you imagine how duller the world would be without Don Moen’s music, John Ortberg’s stories, or Joe Goode’s artwork? “But I don’t have their talent,” you say. How will you know unless you try, although it shouldn’t matter because we’re not competing with anyone. Streetlights don’t compete with each other; they just shine and light up the street. And we need to shine because, as Jesus said, “People do not light a lamp and put it under a bowl. Instead, they put it on its stand, so it gives light to everyone in the house. In the same way, let your light shine before others (see Matthew 5:14-16).

Our gifts light up the world, and they are of such a variety. In Paul’s letter to the Romans, he speaks about how “we have different gifts, according to the grace given to each of us” and then encourages us to use them. “If your gift is prophesying, then prophesy; if it is serving, then serve; if it is teaching, then teach; if it is to encourage, then give encouragement; if it is giving, then give generously; if it is to lead, do it diligently; if it is to show mercy, do it cheerfully” (Romans 12:6-8).

God doesn’t like us neglecting our gifts, and Jesus reserved one of his harshest rebukes for people who bury their talents (see Matthew 25:14-30). However, on the positive side, those who use their talents are well rewarded, and God himself gets into the act!

There is a story told of a mother who took her piano-loving son to a Paderewski concert. Spotting a Steinway on the stage, the boy made his way to it, slipping past his mother. He sat down at the grand piano and innocently began playing “Chopsticks,” unaware hundreds of people were watching him. The stage lights suddenly came on, and he froze, but Paderewski, who had just made his entrance, whispered in the boy’s ear, “Keep playing!” The great piano master joined in as the boy continued playing, transforming a simple tune played by a little boy into a fantastic rendition.

We may believe our gifts are ordinary, but when we begin to use them for the glory of God, he elevates them into something extraordinary. And there’s no time like the present, especially if you are in the wilderness, because pain is the greatest muse. So, what are you waiting for? Let your light shine!