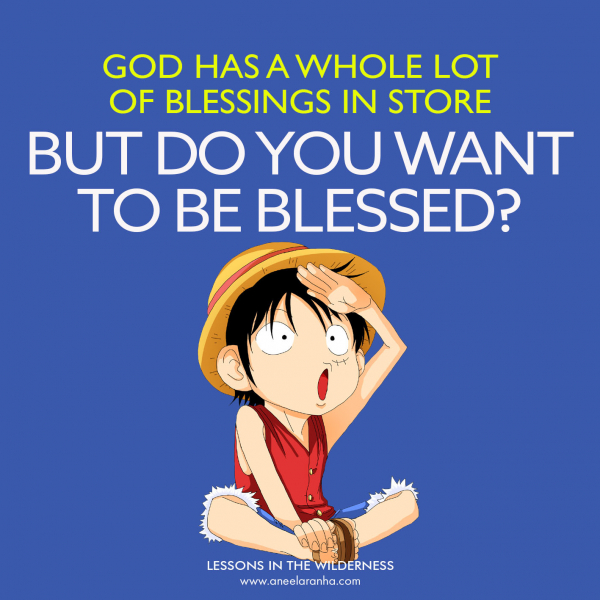 “Do you want to be blessed?” It sounds like a dumb thing to ask, doesn’t it? But, before he blessed people, Jesus would often ask them if they wanted the blessing! For instance, one day, Jesus went to Jerusalem for one of the Jewish festivals (see John 5:1-15). He spotted a man who had been an invalid for thirty-eight years sitting by a pool. Jesus asked the man, “Do you want to be made well?”

Why would Jesus ask this? Because there was a good chance the man didn’t want to be made well! “That’s insane,” you might say, so let me explain. The cripple sat beside a pool believed to have miraculous properties. An angel would come and stir the waters and heal the first one who made it in. Do you really think a guy who sought healing would have let somebody beat him to the pool every day for thirty-eight years? If I had been there and wanted healing, I would have sat by the side ready to jump in, and if I couldn’t do that because of a handicap, I would have had somebody sitting beside me ready to push me into the waters the moment there was the slightest ripple to be seen!

So, now the question is, why would the man not want to be healed? Perhaps the same reason a few of us may not want to be healed. Some of us like to wallow in self-pity. There is a perverse kind of pleasure to be had in feeling sorry for oneself. There is also a sense of satisfaction in having others pity us. If this self-pity is not dealt with immediately, it can become part of one’s lifestyle, like cocaine can become part of a junkie’s lifestyle. Eventually, one does not know how to live without it.

But it’s not only that. Now the man’s very survival depends on his continued sickness! What is he going to do if he is healed? He knows no trade. He has no skills. For thirty-eight years, he has been dependent on the mercy of others. So, when Jesus asked him the question, his saying “yes” was going to result in dramatic changes.

We can be like this man. When we have an addiction, we might enjoy it too much to want to break free. When we are in an abusive relationship, we might remain in it because the alternative is frightening. When we live in the world, we might not want to give up all its pleasures for Christ and the eternal life he promises. But I hope we can see how foolish this is when God promises blessings beyond belief.

So, dear friend, do you want to be blessed? I hope you do because, as Jesus promises, no one who leaves the things of the world behind “will fail to receive a hundred times as much in this present age—and in the age to come eternal life” (Mark 10:30).