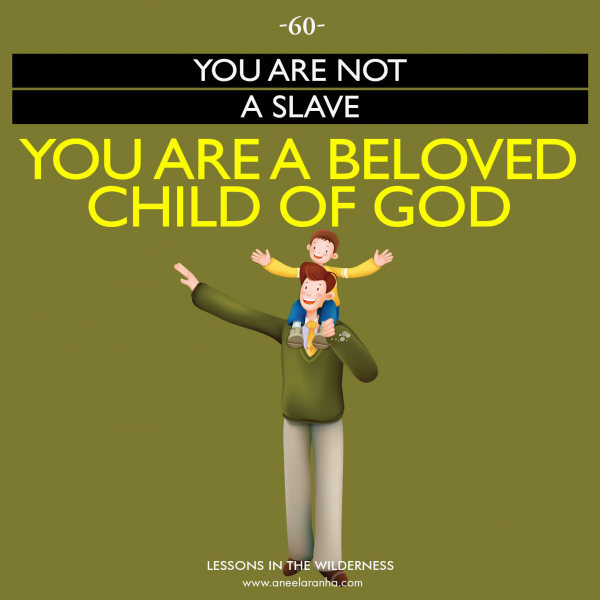 If there is one story in the Bible that all of us know, it is probably the parable of the prodigal son. Jesus told this story of two lost brothers (yes, two, not one!) to illustrate God’s great love for us, but also to point out something important that we often miss in the telling: We are children of God, not slaves!

After squandering his father’s fortune, the younger son ended up in a pigsty, feeding the pigs. When he came to his senses, he decided to go back home and tell his father to hire him as one of his slaves because he didn’t believe he was worthy of being his son. However, his father would have none of it! He welcomed him with open arms and threw a lavish homecoming party. “For this son of mine was dead and is alive again; he was lost and is found.’” (Luke 15:24).

The elder son was furious. He wanted his brother punished, not rewarded! He complained bitterly to his father: ‘Look! All these years, I’ve been slaving for you and never disobeyed your orders. Yet you never gave me even a young goat so I could celebrate with my friends” (Luke 15:29). His language reveals his mentality. He thought of himself as a slave, not a son. If he had, he would have realized that he could have celebrated with his friends all year long because he had the rights of a son! Everything that belonged to his father was his!

We can have a slave mentality too. Like the younger son, we can believe we are not worthy of being God’s children; therefore, we should act as his servants. Like the elder son, we can think we need to earn favor with God, working for wages as servants do. But God tries to remind us that we are his sons and daughters repeatedly! We must begin to internalize this fact because as long as we have a slave mentality, we will never lead lives of freedom as children do.

When we think of ourselves as God’s children, our attitude changes. We no longer act like beggars but as inheritors of God’s great promises. Our language also changes. We start professing life, not death. Even the way we deal with personal sin changes. Slaves expect punishment. Children expect forgiveness. Consequently, the way we deal with the sins of others changes as well. We don’t want them kicked out of the house but want them to know that they are still loved and wanted.

Starting January 3, 2022, we will be starting a new video series titled IDENTITY, where we will look at who we are in Christ. Only when we know our true identity as Christians will we be able to live as God wants us to live and be the people God created us to be. Stay tuned.