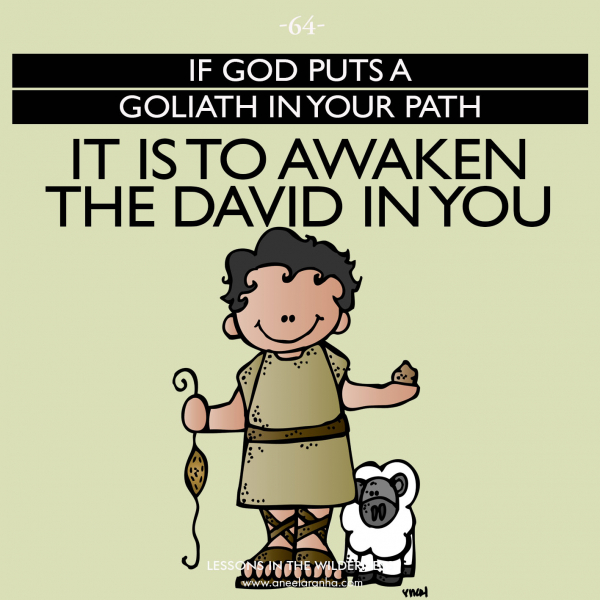 Every once in a while, we will encounter a challenge so formidable we believe defeat is inevitable. It will stare down at us as arrogantly as a giant named Goliath once stared down at the Israelite army, challenging them to take him on. We can be daunted like King Saul and his soldiers were. Or we can look at it as the route God is mapping for us toward our destiny, as he did with a young shepherd boy named David.

God had chosen David to succeed Saul as king. But God didn’t send a prophet to lead him to the throne. He put a giant in front of him. Why? God did this so David would have the respect of a nation who may have otherwise questioned the qualifications of a shepherd boy to be their king.

How did David do this? Approaching Goliath armed with nothing more than a sling and five smooth stones, he told the giant: “All those gathered here will know that it is not by sword or spear that the Lord saves; for the battle is the Lord’s, and he will give all of you into our hands” (1 Samuel 17:47).

This is the key to overcoming the giants that stand in our way. When we try to face life on our own, mustard seeds appear like mountains. But when we put our trust and dependence on God, mountains become like mustard seeds. And when we overcome them, we go about fulfilling the great destiny God has mapped for us.

Let us not pretend this is going to be easy. For a while, after slaying Goliath, David was a national hero. He became King Saul’s pet and beloved of the people. However, not long after, the king became jealous of the young man and made it his life’s mission to kill him! David was on the run for years, forced into several wildernesses, none of his own making. But eventually, he sat upon the throne, his destiny fulfilled.

Despite everything that happened to David, including some tragic personal failures, he never lost his faith in God or his great love for him, which is why God said: ‘I have found David a man after my own heart” (cf Acts 13:22, 1 Samuel 13:14).

May God say that about you too, my dear friend.