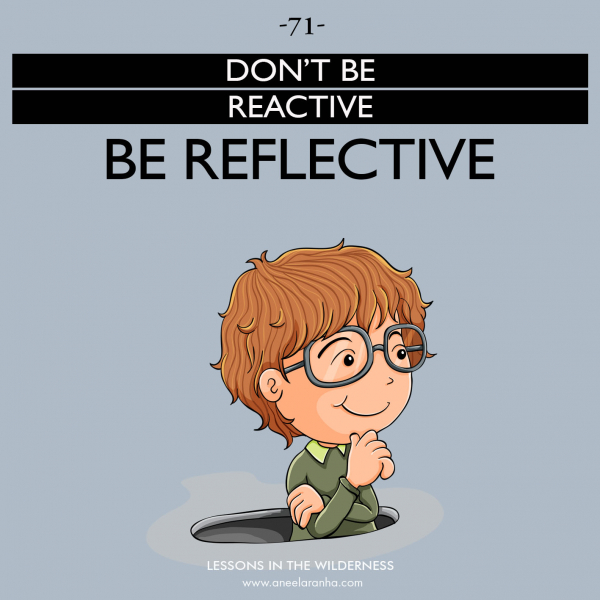 We are generally reactive people. When tragedies strike, when circumstances become difficult, when conversations become heated—even when miracles happen—we tend to react rather than reflect. There is usually very little to be gained by this; on the contrary, reacting often worsens a bad situation. I am sure we have all seen how something that started as a minor argument ended as a major fight!

Being reflective, instead, gives us a chance to look at whatever has transpired (or is transpiring!) and see if there is something we can learn from the situation or gain a better understanding of whatever and whoever is involved.

We can take a few pages from Mary’s book. When Jesus was twelve years old, Mary and Joseph took him to Jerusalem for the Festival of the Passover. After the festival, his parents began their journey home, but Jesus decided to stay behind. When they discovered him missing, they looked for him frantically before finally finding him three days later discussing philosophy with teachers in the temple! When they questioned him, Jesus calmly replied: “Why were you searching for me?” he asked. “Didn’t you know I had to be in my Father’s house?” (see Luke 2:41‑52).

Scripture says, “his mother treasured all these things in her heart.” Mary could have gone ballistic with anger, as many of us might have if our twelve-year-old went missing without a word and then responded with apparent cheekiness to our questions. However, Mary realized there was much to be mined from what had happened if she dug below the surface, so she pondered the events that had taken place.

Very rarely are things how they appear on the surface, but unfortunately, most of us don’t care enough to dig deeper. If we can become reflective rather than reactive, we would better understand people, circumstances, and life in general. This, in turn, would make us gentler, kinder, and more compassionate people because all three come with greater understanding.

So, why don’t you try it, dear friend? As an example, the next time someone in your house throws a tantrum, instead of throwing one of your own, take a day or two to ponder and pray about why it happened. See how God reveals the underlying causes behind the tantrum. Understanding changes perspective and, consequently, your reaction.

I wish you a reflective life!