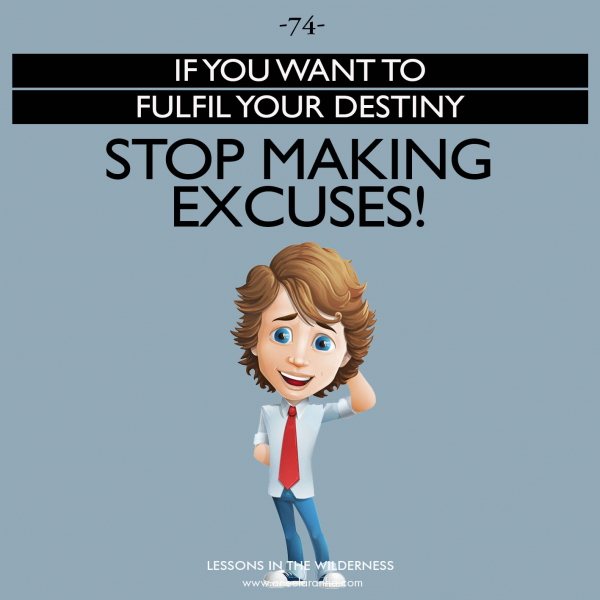 We have a habit of coming up with excuses to get out of difficult and unpleasant situations. All of us have done this, some with dazzling creativity. However, making excuses can keep us from fulfilling our destiny.

Consider Moses. When God told him to lead the Israelites to freedom, one might think he would jump at the opportunity. However, Moses began making excuses—plenty of them!—trying to duck out of the mission God was giving him. As these are excuses we all make, let us look at them in turn. You will find them in Exodus 3-4.

Moses’ first excuse was that he wasn’t qualified for the job. He obviously hadn’t heard the saying that God doesn’t call the qualified, but qualifies the called. “Who am I that I should go to Pharaoh and bring the Israelites out of Egypt?” Forty years in the wilderness had made him forget he was once Prince of Egypt! God said, “I will be with you! Tell the people I have sent you!”

Then, Moses tried to avoid responsibility by making a very lame excuse. “If they ask me, ‘What is his name?’ Then what shall I tell them?” God roared, “I am who I am! Tell them ‘I am’ has sent you to them.”

Moses then tried to get out of the task by saying he wasn’t capable. Does this sound familiar? “What if they do not believe me or listen to me and say, ‘The Lord did not appear to you’?” He seemed to forget that if God was telling him to do something, God would make it happen. So God worked a little miracle by turning a stick into a snake and then back again, telling Moses his power would accompany Moses. It wasn’t enough for the old man!

“I have never been eloquent,” Moses said. I am slow of speech and tongue.” He was now claiming physical limitations, as so many of us do. “Are you saying I messed up when I made you?” God asked, his patience now wearing a little thin.

“Pardon your servant, Lord,” Moses said. “Please send someone else.” This was the ultimate cop-out, one that all of us should be familiar with, and God got mad. “I will give you all the help you need,” he said. And Moses finally acceded.

As I have stated repeatedly in these reflections, God has great plans for us too. He will fulfill them, but we can delay them from happening by making stupid excuses. Let us  stop making excuses and set about fulfilling our destiny.