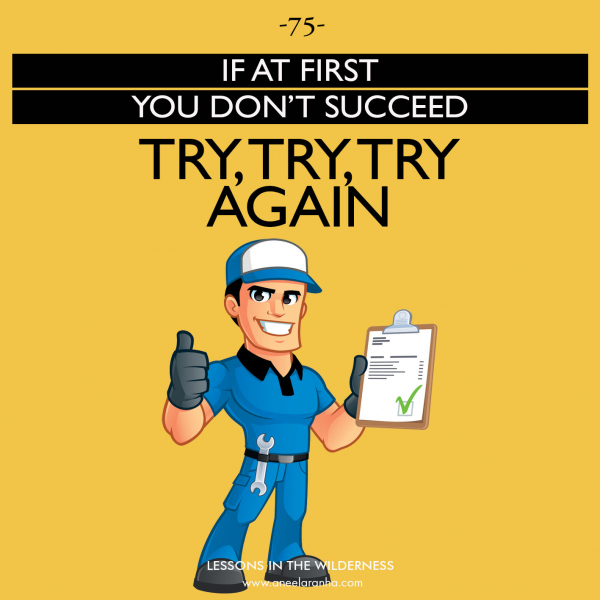 We are often tempted to give up pursuing our goals after we meet with failure, especially when we keep failing. We have tried to quit that addiction, attain that promotion, pass that course, get that driver’s license—the list is endless—but we repeatedly fail. Giving up can take us away from our destiny. It doesn’t matter how many times we fail; we must keep trying until we succeed.

You have undoubtedly heard the story of King Bruce and the spider. Bruce was King of Scotland and quite a hero until he suffered a terrible defeat at the hands of the English. Forced into hiding, he took refuge in a cave, where he noticed a small spider attempting to weave a web. The spider kept falling, but it climbed back up to try again each time it fell. Finally, the spider’s silk took hold, and it managed to spin a web. The king found the inspiration to return to battle, and he defeated the English despite overwhelming odds.

We find similar inspiration in the Bible. There was a severe drought in Samaria, and God sent Elijah to the desperate King Ahab to tell him that there would be rain. Then Elijah went up Mount Carmel and began to pray. After a while, he told his servant to see if there was any sign of rain. “There’s nothing there,” the servant replied. Seven times Elijah said, “Go back and look again,” and the seventh time, the servant reported that he had seen a cloud. In moments, there was a heavy thundershower (see 1 Kings 18).

Imagine what would have happened if Elijah had given up on the sixth attempt. It might still very well have rained because God keeps his promises, but Elijah might have missed out on his destiny! Scripture says that while “the sky grew black with clouds, the wind rose, and a heavy rain started falling King Ahab rode off to Jezreel. But the power of the Lord came on Elijah and, tucking his cloak into his belt, he ran ahead of Ahab all the way to Jezreel”.

So let us take a note from Elijah’s book and keep at it again. And again. The great inventor Thomas Edison who failed about a thousand times before he invented the light bulb, once said, “Our greatest weakness lies in giving up. The most certain way to succeed is always to try just one more time.”

So, it doesn’t matter how many times you have failed, dear friend, or how long you have been trying. Try it just one more time. And, then, if needed, one more time until you succeed.