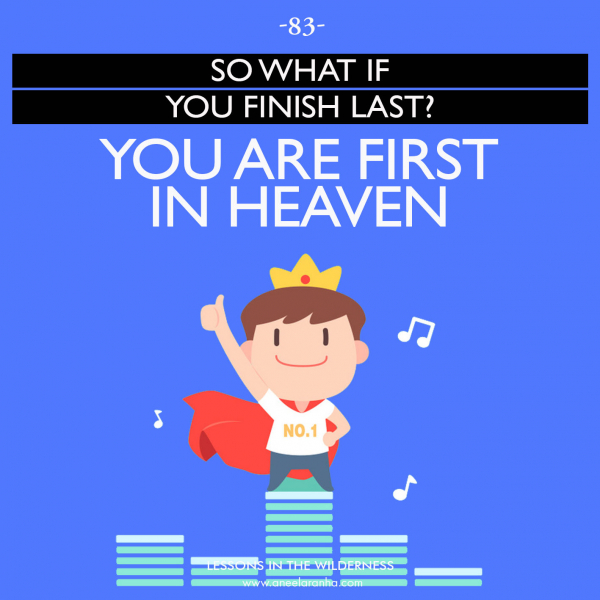 Have you heard the saying, “Nice guys finish last”? It essentially means that those who are overly pleasant, considerate, or submissive will not be as successful as those willing to be cut-throat and heartless. Since many of us have experienced this to be true, we have tried to become as ruthless as the competition, climbing over some on our way to the top, and bribing or bullying others to ensure we get there faster.

How does this work? Let me tell you a story. A group of boys in an orphanage used to get a goody bag every Thursday. The bigger, stronger boys would always push the smaller, weaker boys out of the way and make it to the head of the queue. One day, the person distributing the goodies noticed this. He waited until the line was formed, then, with a soft smile, went to the back of the line and began distributing the goodies from there!

So, the question is whether we want to be first on earth or first in heaven. I’m hoping the answer will be the latter because our rewards on earth are temporal. However—and this is the amazing part that we often don’t get—when we seek to be first in the kingdom of heaven, we often end up first in both places.

Let me explain. A rich young man once went to Jesus asking him about the secret of eternal life. After a brief conversation, Jesus told the young man that if he wanted to be perfect, to sell all his possessions, give the proceeds to the poor, and then follow him. Scripture says the young man went away very sad because he couldn’t bear to be parted with his wealth, which led Jesus to say it was easier for a camel to enter the eye of a needle than a rich man to heaven.

The apostles then wanted to know what was in it for them since they had left everything to follow Jesus. How typical! “Truly I tell you,” Jesus said to them, “no one who has left home or wife or brothers or sisters or parents or children for the sake of the kingdom of God will fail to receive many times as much in this age, and in the age to come eternal life” (Luke 18:29).

So, be a nice guy! In finishing last, you might end up finishing first!