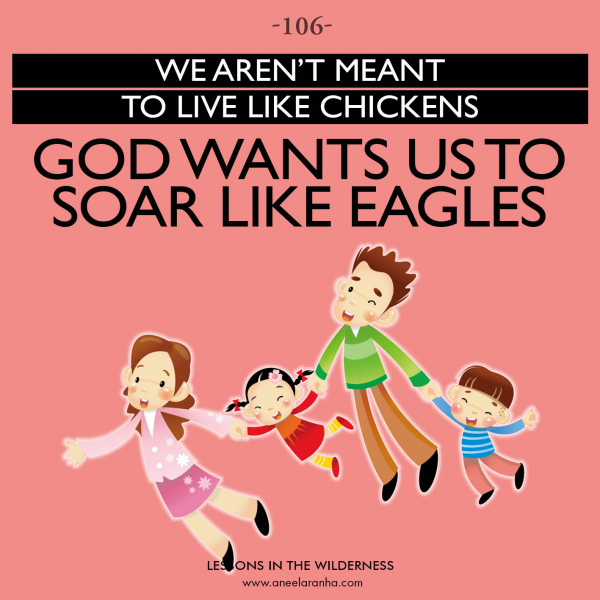 Don't you ever get tired of the constant bickering that goes on in the little cliques we belong to, be it in our neighborhood, office, or church? Don't you get fed up with the rivalry, politics, and one-upmanship, with each group beating or belittling the other in their attempts to be king of the coop? The solution is to fly up and away, out of the coop. We aren't meant to live like chickens in tiny little factions because God created us to soar high and free like eagles. And when we see things from a distance, our perspective widens.

Many years ago, I read a science fiction short story by Theodore L. Thomas titled "The Far Look." The story follows two astronauts on their mission to set up a base on the Moon. When they return to Earth, both exhibit vastly increased intelligence, but scientists cannot discover what is causing this. The only external sign is a "far look" in their eyes, as though they can see beyond what others see.

Many years later, real-life astronauts Michael Collins (who was with Neil Armstrong on Apollo 11), Ron Garan, and Rusty Schweikart—among several others who had gone into outer space—described a shift in awareness after returning to Earth from space missions. Third-party observers reported a noticeable difference in their attitudes. In 1987, writer Frank White coined the term "overview effect" to describe this shift that took place when the astronauts saw our little blue planet as a tiny, fragile ball of life—without national boundaries or the conflicts that divide people—changing the way they looked at Earth forever.

We need to change the way we look at the Earth too. If we see it as the astronauts do, we will automatically eliminate our barnyard mentality and start seeing things as the eagle does. Or as the astronauts do. Many of the divisions that separate us will crumble like the Berlin Wall, and we will be able to lead lives of unity that God so wishes us to have. Shortly before he died, one of Jesus' final prayers was that we live united (see John 17:20-23).

A few years later, Paul would encourage us to do the same. "I urge you," he wrote, "to be patient, bearing with one another in love. Make every effort to keep the unity of the Spirit through the bond of peace. There is one body and one Spirit ; one Lord, one faith, one baptism; one God and Father of all, who is over all and through all and in all" (see Ephesians 4:1‑6).