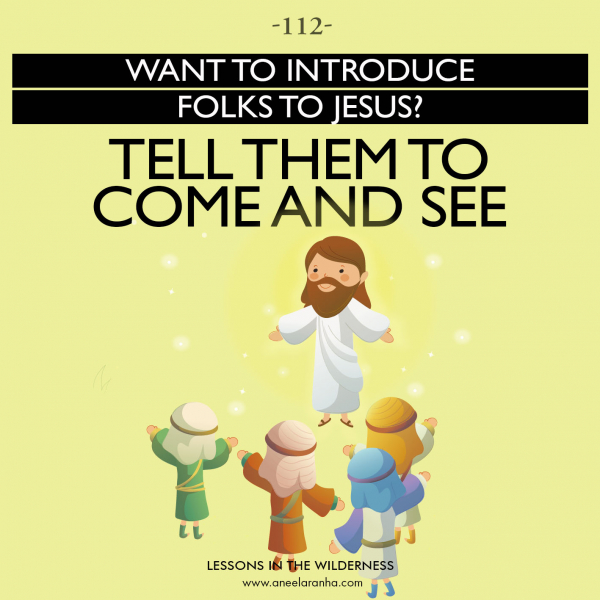 One of the questions that God is sure to ask us when we make it to heaven is how many people we brought along with us. I am afraid that many of us will find ourselves embarrassed with the answer. However, it doesn't have to be this way because it is very easy to introduce people to Jesus. All we have to do is tell them about how he has impacted our lives, and they will be moved to find out more. Then, all we need to do is say, "Come and see."

That's what Jesus told two men to do when he caught them following him one day. "Come and see," he told them (see John 1:29). And when they spent some time with him, they became followers of Jesus. Later, one of these followers, Philip, told his friend Nathaniel to do the same thing. "We have found the one the prophets wrote about," he said; "Jesus of Nazareth." When Nathaniel asked him if anything good could come out of Nazareth, which was an insignificant little town, Philip said, "Come and see" (see John 1:43-46). Nathaniel became a follower.

A few months later, when a Samaritan woman realized the man she met at a well was the Messiah, she ran into town telling everybody about him. "But you don't need to take my word for it," she said, "Come and see!" And when they met him, "many more became believers" (see John 4:1-42). This is the "automatic" response that anyone who has encountered Jesus has: to go and tell others about him and invite them to come and see.

"But," you may say, "how can we tell people to 'come and see' Jesus today? He's not physically in our midst as he was two thousand years ago." That is true, but we can introduce people to Jesus by sharing our own experiences of him: how we encountered him and the difference he made to our lives. If we are not confident enough to speak about him at the moment, there is an even easier way. Introduce Jesus to them through the Bible, where many of the things he did and said are recorded. It is the rare person who can meet Jesus and not be moved by his great love.

Not everyone will care to "come and see." They're like kids who decide they don't like a particular dish without even tasting it. Let this not discourage us. Salvation is God's work; he is the one who saves. However, in his infinite wisdom, God has decided to collaborate with us so let us do our part. Then God will do his part.