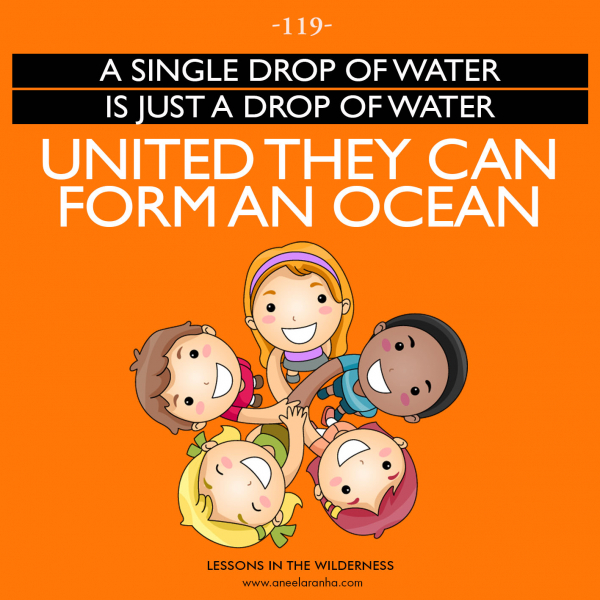 Some of us are loners, but God didn't create us to journey through life alone. He created us to be social people, and other than the joy company can bring us, there is strength in numbers. Additionally, the sum is greater than its parts. A single drop of water remains a single drop of water, but united they can form mighty oceans.

When we become Christians, we automatically become united in the body of Christ with every other believer. This should give us tremendous confidence because if there is strength in numbers, there is great strength in unity. Consider the fingers of one hand. Spread out, the fingers are easily broken. But put five fingers to make a fist, and it's going to be hard to break them.

It can be the same with us. Unfortunately, we are not united. Long before the British formulated their policy of Divide-and-Rule, which helped a tiny nation rule half the world, Satan was there dividing Christians across the board. And he has succeeded even better than the Brits did, getting us fighting with each other instead of him!

What is the antidote? Well, we can choose to listen to Jesus, whose final prayer before his Passion was for Christian unity. He said, "(I pray) that they may be one as we are one — I in them and you in me—so that they may be brought to complete unity. Then the world will know that you sent me and have loved them even as you have loved me." (John 17:22-23).

Or we can pay heed to Paul, who urged unity several times: "I appeal to you, brothers and sisters, in the name of our Lord Jesus Christ, that all of you agree with one another in what you say and that there be no divisions among you, but that you be perfectly united in mind and thought" (1 Corinthians 1:10).

Or we can think about what we declare when we say "The Lord's Prayer." Whether Lutheran or Methodist or Baptist or Catholic, every believer in Christ knows and says this prayer, often with great reverence. I invite you to consider that there is not a single "I," "me," or "mine" in it; there is only a prayer for "us." When I say this prayer, I am also praying for my brothers and sisters. And who are they?

The prayer begins with the words, "OUR Father." We acknowledge two things when we say this. One, that I am a child of God, the Father; two, every other believer is also a child of the Father. John attests to this in his gospel: "But to ALL who received (Jesus), who believed in his name, he gave power to become children of God" (John 1:12). So, do we each have a different father we are praying to, or is it only one? And if we have one father, then what is our relationship with other believers. Let us be united and we will be mightier than the oceans!