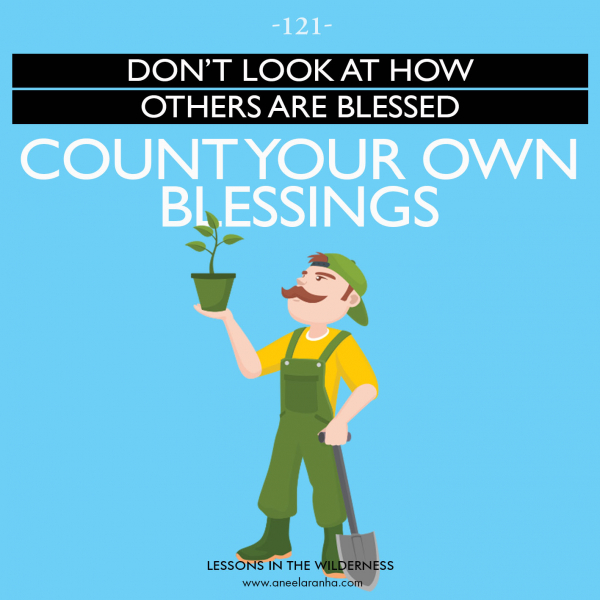 When we look around us at other people and see how gifted they are and how successful they have become in life, we can feel shortchanged. We can believe that God was unfair when he was distributing blessings. I suppose it is human nature to think the grass is always greener on the other side, but this simply isn't true. Our problem is that we have our eyes on what our neighbors have rather than looking at what we have got.

Even Peter, the great apostle, was not exempt from this habit. After Jesus rose from the dead, he met Peter, and over a breakfast of fried fish, asked him: Do you love me? Jesus posed the question three times, presumably one for each time Peter had denied Jesus. Every time Peter answered that he did, Jesus gave him a commission.

When Peter and his mission were restored, he followed Jesus as he got on the road, when he noticed John following them. He couldn't resist asking Jesus, "Lord, what about him?" Peter had just been given the massive task of shepherding lost souls that would keep him busy for the rest of his life, but he was concerned about God's plans for John! Jesus rebuked him gently, telling him it was no business of his!

Similarly, it is no business of *ours* how God chooses to bless other people. It is his prerogative to bless people as he chooses. If we only look at what we have been given, we will find it is enough for us. If we do well with it, we will be given more. However, we are often so resentful and jealous of what others have that we become contemptuous of what God has given us and do nothing with it.

Jesus once told a parable about a seemingly unequal distribution of blessings (see Matthew 25:14–30). A man went on a journey entrusting his servants with his wealth. To one, he gave five bags of gold, to another two bags, and to another one bag. The first two men doubled what they had been given, but the third man buried it. In other words, he did nothing with it, possibly for reasons already stated. When the man returned, he rewarded the first two servants, saying, "You have been faithful with a few things; I will put you in charge of many things. Come and share your master's happiness!' As for what he did to the third servant, the less said, the better.

So, dear friend, let us count our own blessings and do the best we can with what we have been given. If we look at what we have in our own lawn and tend to it, we can have grass that's as green as anybody's. (Not that we are looking anymore, of course!) And, hey, if we want a really pretty lawn, we can grow some flowers too!