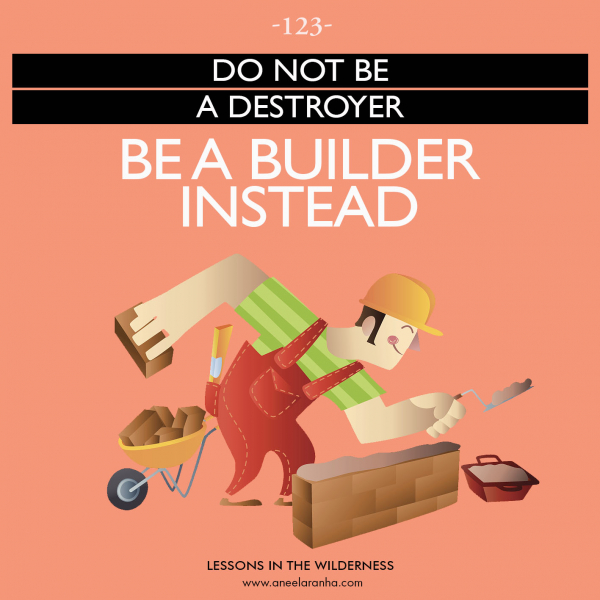 When the World Trade Center's Twin Towers opened to the public in 1973, they were the tallest buildings in the world. They took 14 years to build at the cost of more than $1 billion. On September 11, 2001, two planes hijacked by terrorists crashed into the buildings, and in less than two hours, both towers were reduced to rubble. It is so easy to destroy what has been so hard to build.

When *we* seek to destroy, we have our reasons too. We can justify them to all who ask. And we will be able to do so well because we have rationalized it so cleverly in our minds. However, we need to take a page from God's book. If anyone truly has reason to destroy, it is God. For centuries of rebellion, he had justification for smashing us with his mighty fist. Instead, he sent his Son to be broken so that we could be repaired. He is a builder, not a destroyer, and as people created in his image and likeness, we should be builders too. Or rebuilders.

And while we are in restoration mode, we can ask God to rebuild us. We can find the glue to put us back together in Scripture, where we will learn how to find rest for our weary sinful souls, discover how to be content in every situation, and how to live in peace with our brothers and sisters. And as the psalmist declares, we will soon be "like trees planted by streams of water, which yield their fruit in its season, and their leaves do not wither. In all that we do, we will prosper" (see Psalm 1).