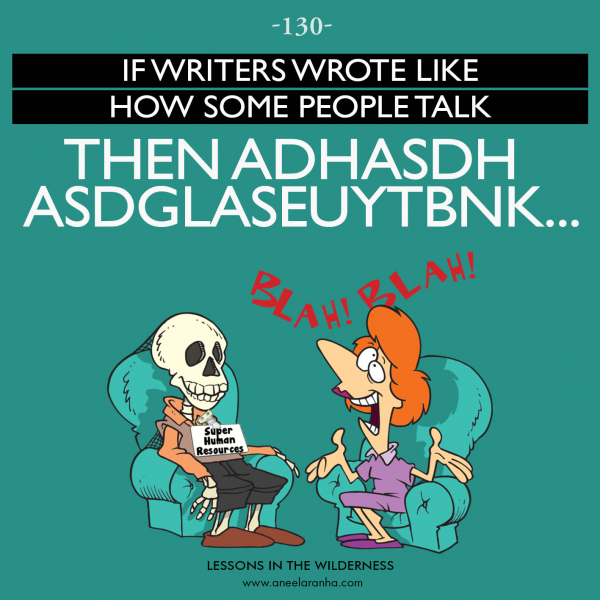 In Sergio Leone's classic western movie, "The Good, The Bad, The Ugly," there is a memorable scene featuring Eli Wallach, who gave one of his career-best performances in his role as Tuco; aka "The Ugly." While he is soaking in a tub taking a much-needed bath, a man barges in with a gun in his hand. He tells Tuco why he is there to kill him, and after a minute of listening to him, Tuco suddenly shoots him with the gun he had concealed under the soap suds, saying: "When you want to shoot, shoot, don't talk!"

It is excellent advice. I am, of course, not advocating shooting people, but action over words. It seems to me that we often spend more time *talking* about doing things than actually doing them. We often form committees to study something, and after months of endless meetings, decide the idea isn't practical and shelve the project. What a waste of time!

Have you noticed that most people who accomplish much, talk little? This is because they are too busy putting their plans in motion rather than talking about how to make them happen. Even in collaborative ventures, where meetings are necessary, their words are crisp and to the point, with ideas presented clearly and decisions taken rapidly. They have little time to waste.

People who talk less are also more likely to lead lives pleasing to God. James says, "Those who consider themselves religious and yet do not keep a tight rein on their tongues deceive themselves, and their religion is worthless" (James 1:26). This, and other verses in Scripture, suggest that the more we talk, the more we will sin. The reason for this is that "no man can tame the tongue. It is an unruly evil, full of deadly poison" (James 3:8).

May the Spirit be with you

P.S. The blurb on the visual is an adaptation of a quote by Lemony Snicket. The full quote reads: "If writers wrote as carelessly as some people talk, then adhasdh asdglaseuyt[bn[ pasdlgkhasdfasdf." Enough said.