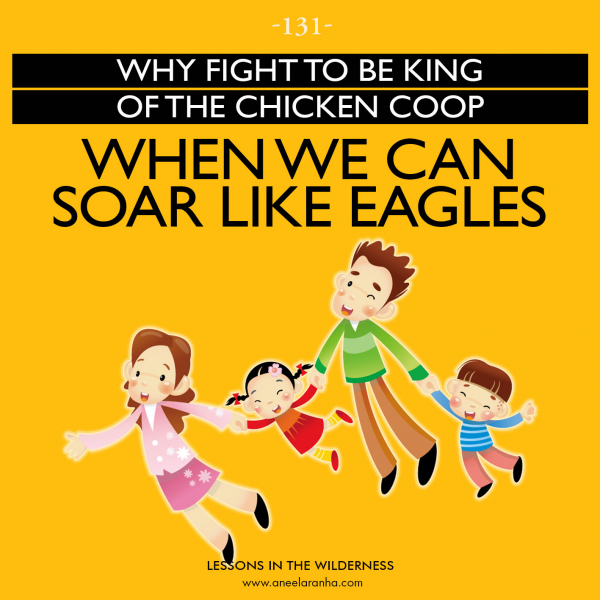 An eagle's egg once rolled out of its nest and came to rest among the eggs of a chicken. The mother hen didn't realize she had an extra egg among her own and sat on top of them until they hatched. If she thought there was something strange about a black bird in the middle of her golden chicks, she didn't let it bother her; she raised the little eagle like one of her own.

The baby eagle grew up with the chickens, realizing that there was something very different about how he was compared to his brothers and sisters. But, raised among chickens and treated like a chicken, he believed he was a chicken and acted like a chicken, pecking in the dirt looking for food as the others did

Once in a way, he would spot a black, majestic bird flying high up in the sky, and his heart would fill with a deep longing to soar, but then he would push the thought away and return to pecking in the dirt. Why dream the impossible? He was, after all, a chicken.

One day, a mighty gust of wind swept across the barnyard taking all the birds up in the air. Unable to fly for more than a few seconds, the little chickens dropped to the ground one by one, but the little eagle realized that if he flapped his wings, he remained afloat. If he flapped them harder, he rose higher. And if he rode a current of wind, he could soar higher still.

In a few moments, he was flying high up in the sky. From there, he looked down upon the barnyard where he had lived and at his brothers and sisters who were back in their coops pecking in the dirt as usual, and he said to himself: I'm not a chicken; I'm an eagle. And he raised his head and flew higher.

Now, what has this story got to do with us? A lot because Christians are like that baby eagle. Born in the world, we often live as the world does. Like chickens in a coop, we cannot see beyond the tip of our noses, pecking in the dirt searching for scraps, with the more ambitious among us trying to be king of the roost. Why don't we allow the Holy Spirit to carry us out of our barnyards and into the freedom of the deep blue sky instead? He will show us our planet for what it is: a small, tiny blue ball that is extremely fragile and inspire us to do what we can to save it, not destroy it as we seem so determined to do.

Tweet
More in this category: « Blabbermouths Nothing is Impossible »
back to top
© 2004 - 2023 Aneel Aranha