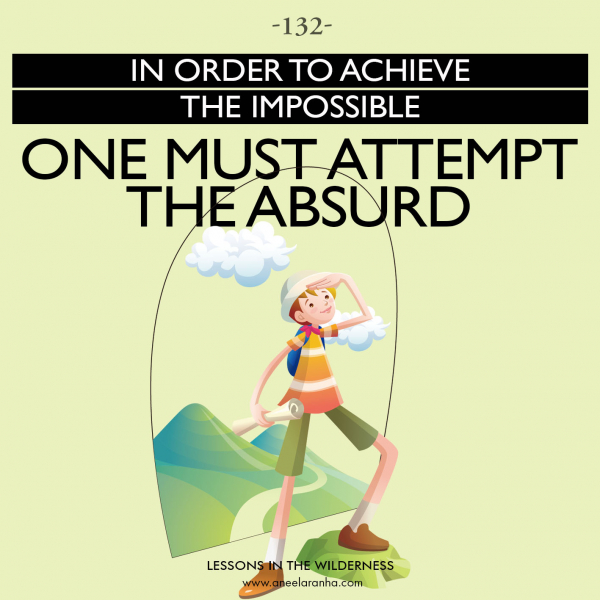 When I came across a quote by Miguel de Unamuno where he said, "In order to attain the impossible, one must attempt the absurd," the first person who sprung to mind was Noah. He set about building an ark to save living creatures from a flood when there was not a single dark cloud in the sky. How people must have mocked him as he put hammer to nail. But look at what he accomplished!

And then I got to wondering about other men and women who achieved the impossible, and I realized how many of them did this by attempting the absurd. We may have heard of Ludwig van Beethoven who kept pumping out musical masterpieces after he became deaf, but we may not have heard of Esref Armagan taught himself to both write and paint despite being born blind.

We may have heard of Malala Yousafzai, who was shot in the head by Taliban gunmen just because she wanted an education and was recently awarded the Nobel Prize for peace, but we may not have heard of Margaret Ann Bulkley, who had to dress as a man to practice medicine because she was born at a time when women didn't have many career options.

We may have heard of British-born Sikh army officer Preet Chandi who just became the first woman of color to complete a solo expedition to the South Pole, but we may not have heard of Fauja Singh, who ran his first marathon at age 89 and was awarded the prestigious British Empire Medal to mark his subsequent achievements.

There are thousands of stories of men and women, many with severe disabilities, who achieved impossible things, often simply because they were determined to achieve them. To quote Erik Weihenmayer, who scaled Mouth Everest despite being blind: "What's within you is stronger than what's in your way."

For the believer who has God by his side, overcoming obstacles should be easier. Jesus said, "All things are possible with God" (Mark 10:27), and although he was speaking in the context of salvation, there is nothing impossible with God. The enemy will keep taunting us that we will never achieve anything in life, but don't listen to him. Listen to missionary Hudson Taylor instead. "There are three stages to every great work of God; first it is impossible, then it is difficult, then it is done."

So, go for it! And may the Spirit go with you.