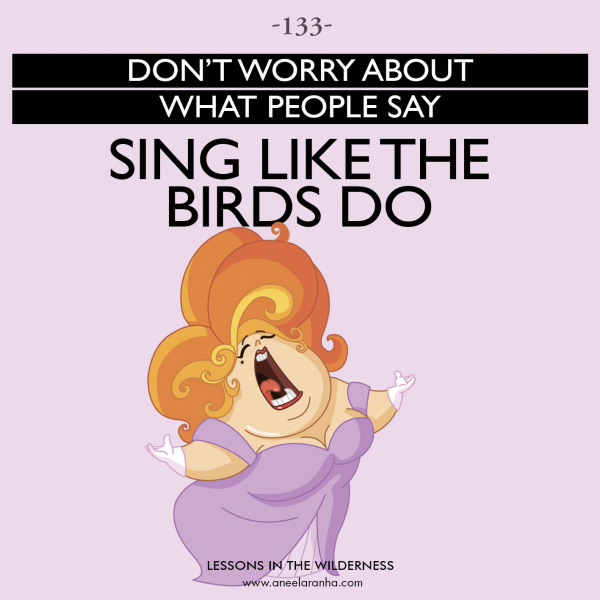 When I was a young boy and singing very enthusiastically at a church service, the choirmaster told me that I couldn't sing and to keep it down. I stopped singing after that (in public anyway) because I believed I had a terrible voice. It was only when I rediscovered Jesus about twenty years ago I started singing again because he told me to sing for him. Although I will never be up on a stage belting it out like Harry Styles or Bruno Mars, I can pretty much hold a tune now. In fact, I have written about thirty songs and was bold enough to sing two of them! Not bad for a boy who was told he couldn't sing, yes?

I don't know how many of you have been told you can't sing (or cannot do something else that you want to) but ignore those voices of discouragement and sing as the birds do. Not all birds can sing like the Blackbird or the Goldfinch, but that doesn't stop the Cactus Wrens and the Scarlet Macaws who sound terrible from giving expression to their musical inclinations.

We shouldn't let anything stop us either. There are dozens of verses in the Bible that encourage us to sing, and in fact, some seem like commands to do so! The psalmist urges us: "Sing to the Lord a new song, his praise from the ends of the earth" (Psalm 42:10). And Paul tells us to "be filled with the Spirit, speaking to one another with psalms, hymns, and songs from the Spirit. Sing and make music from your heart to the Lord" (Ephesians 5:19).

How does one *speak* with psalms and hymns and songs? We can get a clue from Paul, who quotes songs from early Christian worship several times in his writings. We can find one example in Ephesians 5:14, where Paul says, "Wake up, sleeper, rise from the dead, and Christ will shine on you." This is an extract from a bit of early Christian worship.

If we were to do this today, I suppose we'd be telling each other to "Lift up your hands and open up your hearts. His victory over sin and death is ours. So, let the King of kings take his rightful place, and make room, make way for our King of grace." If you haven't recognized it, these are the lyrics from Don Moen's "Lift up your heads."

Bottom line: Sing! In Africa, there is a saying, "If you can walk, you can dance; if you can talk, you can sing." So, sing!