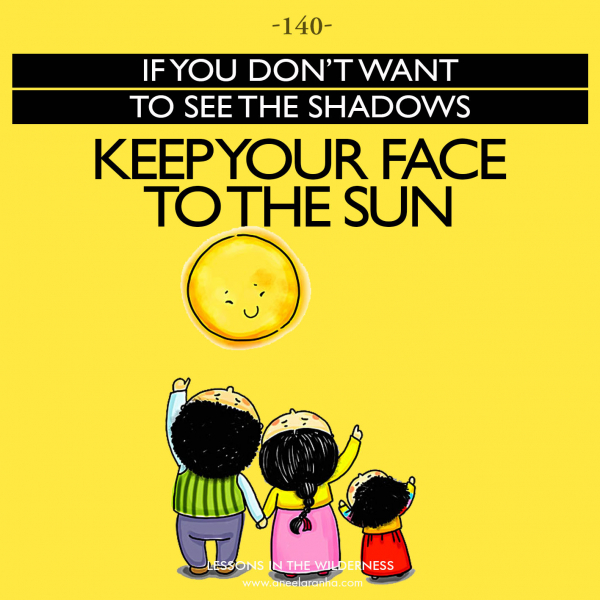 I learned about Alexander the Great when I was learning history in school. One of my favorite stories was how Alexander got his horse Bucephalus. Busephalus couldn't be tamed. He allowed no one to mount him, refused to obey the commands of the grooms, and reared up against anyone who approached him.

Alexander, then a teenager, watched the horse throw off rider after rider before asking the king —his father, Philip —to let him have a try. After some argument, his father said he could. Ignoring the laughter around him, the young Alexander got astride the mighty beast, grasped his reins, and galloped off with the horse as everybody watched open-mouthed.

How had the young man been able to do what expert riders could not? Alexander had noticed that the horse was afraid of his shadow when a rider was astride him! So, he pointed the horse's face towards the sun and rode until the animal lost his fear!

Perhaps we can learn something from this story. Where there is light, there will always be shadows. Life has its bright side, but it also has a dark side. We can let the darkness draw our attention and hold it, leading to suspicion, anxiety, worry, alarm, fear, dread, and dozens of other "dark" emotions. Or, we can focus our gaze toward the light and be filled with positivity and possibility.

Helen Keller once said, "Keep your face to the sun and you cannot see a shadow." (She must have heard about Bucephalus!) It's interesting to note that Helen Keller lived in darkness as she lost her sight after an illness she contracted when she was 19 months old! But despite her handicap — or probably *because* of it — Helen became a person who helped thousands of people, especially the blind

If we can find the motivation, we will be able to help people too — hundreds, if not thousands — who are also blind, albeit spiritually, bringing hope where there is despair, love where there is hate, and peace where there is strife. All we need to do is point their faces toward the *son*.

May the Spirit motivate you.