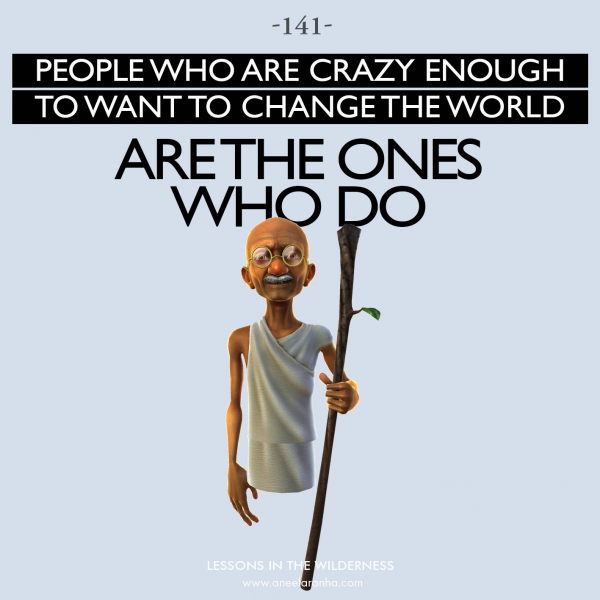 Richard Attenborough's movie *Gandhi* begins on a train with Gandhi making a journey to South Africa as a 23-year-old youngster. He holds a first-class ticket but is told to move to second-class because his compartment was reserved for whites. When Gandhi refuses, he is unceremoniously thrown off the train at the next platform.

We see bewilderment in Gandhi's eyes and anger at the blatant injustice in what had just happened. But his clenched jaw signaled a determination that he wasn't prepared to accept unfair laws. He was going to change them, no matter what it took. And he did, using non-violence rather than violence as the means of change! "An eye for an eye," he famously declared, "will only make the whole world blind."

Jesus, of course, had said something similar: "You have heard that it was said, 'Eye for eye, and tooth for tooth.' But I tell you, do not resist an evil person. If anyone slaps you on the right cheek, turn to them the other cheek also" (Matthew 5:38-39).

Gandhi admitted Christ inspired him and influenced him greatly. However, he wasn't very impressed with those who followed him. "I believe in the teachings of Christ, but you on the other side of the world do not. I read the Bible faithfully and see little in Christendom that those who profess faith pretend to see."

He seems to have a point, wouldn't you say? How many Christians in centuries past have been like Christ? Over the years, Christians have practiced systematic racism, like in America; engaged in bloody wars and crusades, like across most of Europe; and committed atrocities of the worst kind all around the world, leaving it in far worse shape than it was when Christ walked upon it. Much of this *still* continues!

What is the solution? I believe it lies with Christ. Everything he said two thousand years ago is more relevant to us today than ever before in human history. Let us start putting these things into practice, even though they seem bizarre. Like offering the other cheek if someone slaps one! Folks will call us crazy if we start doing things like this. However, they called Gandhi crazy too. And Martin Luther King Jr. And so many others who followed in their footsteps. But these men changed the world.