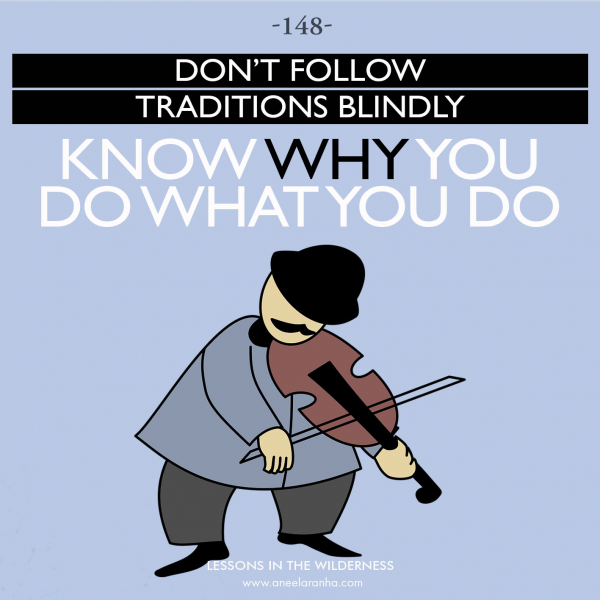 One day, the Pharisees — who were sticklers for rules and traditions — noticed Jesus' disciples eating food without washing their hands. The disciples weren't unhygienic. The washing was a ceremonial custom handed down over the years and served no practical purpose. The Pharisees asked Jesus, "Why don't your disciples live according to the tradition of the elders instead of eating their food with defiled hands?" Jesus called them out for hypocrisy, saying, "You have let go of the commands of God and are holding on to human traditions" (Mark 7:8). We may be guilty of the same thing.

When I was a boy, I watched a lovely movie called *Fiddler on the Roof* starring Topol. Topol played Tevye, a poor Jewish milkman living in a small Ukrainian village with his rather large family. Like everybody else in his village, he was hooked on traditions handed down by their ancestors for ages. In one wonderful segment, Tevye explains one of the traditions: "We always keep our heads covered and wear a little prayer shawl. This shows our constant devotion to God." Then he adds: "You may ask: How did this tradition get started? I'll tell you: I don't know."

That's the problem with tradition. We don't know the how or why of things. We follow them blindly because our ancestors did. Following traditions is not a bad thing if we understand *why* we do what we do; otherwise, they can not only be meaningless exercises, they can be downright stupid.

About fifty years ago, mothers told their children not to cut fingernails at night or snakes would come into the house (or some such rubbish). Why would they say something like that? Because in *their* mother's time, they didn't have nail clippers or electricity. They had to cut their nails using razor blades, and if they tried cutting their nails in the dark, there was a good chance they'd cut off a finger instead of a nail. So, they frightened our mothers, and our mothers, in turn, frightened us!

Now, this might seem a pretty harmless thing, but there are other traditions we follow that go against the commands of God, like some superstitions we practice. In some cultures, people place objects on their doors, ostensibly to protect them from the evil eye. Other cultures mark their babies for a similar reason. As we ask ourselves why we do things, let us look at the word of God for validation, and we'll lead more sensible (and God-pleasing) lives!