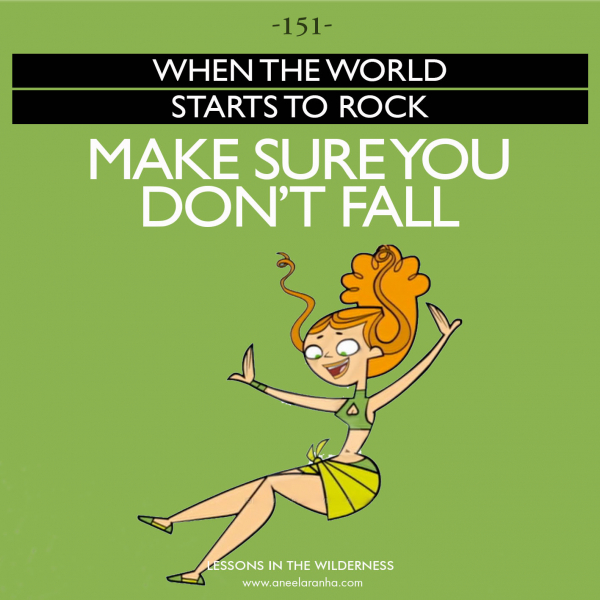 When I look back on my childhood and think about the fairy tales we were told, I find myself horrified. Most were horror stories! Just think of Hansel and Gretel abandoned in the woods by their parents or Red Riding Hood gobbled up by a wolf! Nursery rhymes were no less terrible, with kids falling down hillsides and breaking body parts and spiders frightening little girls while they had their dinner! These stories and poems are no longer part of the diet offered to children (thank God!), but I believe they should be part of *our* diet because many of them contain profound life lessons.

One, for instance, is Rock a Bye, Baby. Remember it? Rock-a-bye baby, on the treetops/When the wind blows, the cradle will rock/When the bough breaks, the cradle will fall/And down will come baby, cradle and all. Ouch! So, what's the lesson

Civilization, as we understand the word, is like that cradle. We are rocked into a sense of complacency because it gives us the appearance of safety and security. However, we are not entirely civilized. There is still the remnant of the uncivilized man within us. Christians would call him the "old man" but let us call him the beast. Because of our brokenness, the beast sometimes slips out, and can cause terrible damage, sometimes within seconds.

Consider the Will Smith incident. His mother said Will was one of the calmest persons she had ever known. So what happened to him that night at the Oscars? A reader brought it to my notice that Will's father was very violent toward his mother and how Will had often spoken about his feelings of helplessness when this happened. When Chris Rock riled his wife, the characters blurred, but he was no longer helpless little Will, unable to defend his mother. He could strike back. And right there, in the epitome of *civilization*, where everyone was impeccably dressed and on their best behavior, Will struck back. The beast was loosed.

Will Smith is a good man, but he is also a broken man. Just like the rest of us. When things go well, we are fine. The cradle rocks gently. We are at peace. But when things get rough, we are not. The bough breaks, and the cradle falls. I am convinced the only thing that will save us from crashing to the ground is dying to ourselves, effectively destroying the beast, and letting Christ live in us. Every Christian should be able to declare like Paul: "I have been crucified with Christ and I no longer live, but Christ lives in me" (Galatians 2:20). Unfortunately, many of us don't even know where to begin.

It is beyond the scope of this article to explain this further, but I am giving a talk on being *Born Again* this Saturday on Zoom. Please join in, and perhaps we can learn how to stop the cradle from crashing, baby and all.