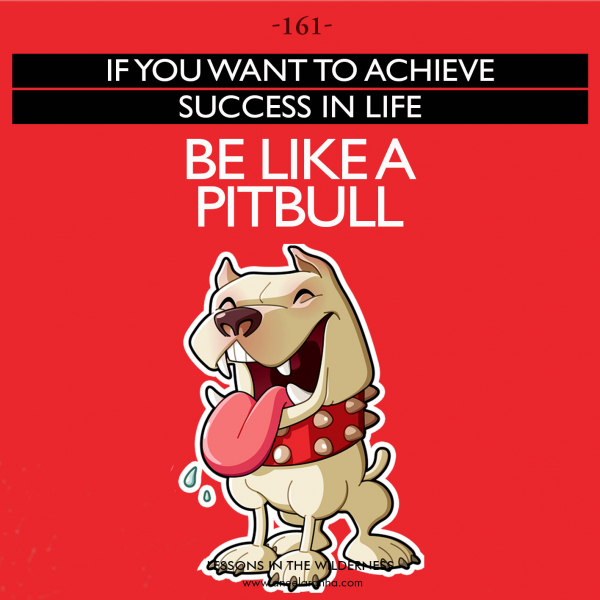 When undertaking a difficult task, very few people succeed in their first attempt. Or in their second. Or even in their third. The people who eventually succeed are those who refuse to be daunted by failure but press on determinedly until they succeed. They have a pitbull mentality.

We need to have a pitbull mentality, not in the sense of the dog's viciousness (which, incidentally, is a myth) or aggressiveness, but in its trait of not letting go of something it gets its teeth into (no pun intended). A successful person never lets go or gives up until he achieves his goal. Setbacks only serve to spur them on more instead of discouraging them.

Consider the inventor Thomas Alva Edison. Had Edison not been a man of doggedness, it may have taken many years before we had the electric light. Edison is believed to have failed nearly 10,000 times before perfecting the first electric light bulb. On one occasion, when he was asked about his failures, Edison retorted, "Don't you realize that I have not failed but have discovered ten thousand things that won't work!"

That is a fantastic way of looking at failure. Instead of beating ourselves up about it, as we usually do, we look at it simply as something that didn't work and look for ways in which we *can* make it work. Eventually (perhaps after 10,000 attempts), it will. "But what if it doesn't?" you may ask.

Athletes train for months before a race, with no guarantee that they will win. However, they keep at it until they do win, but even if they don't, they don't quit. Their satisfaction lies in the knowledge they are doing their best, and their joy comes from not being a quitter. They finish the race!

The same principle holds for living the good life. It isn't easy walking on the straight and narrow path, and anybody who says they have never stumbled is not being honest. What is important is that we rise whenever we fall and keep trying. As Paul advised: Let us not become weary in doing good, for at the proper time we will reap a harvest if we do not give up (Galatians 6:9). So, keep on keeping on!