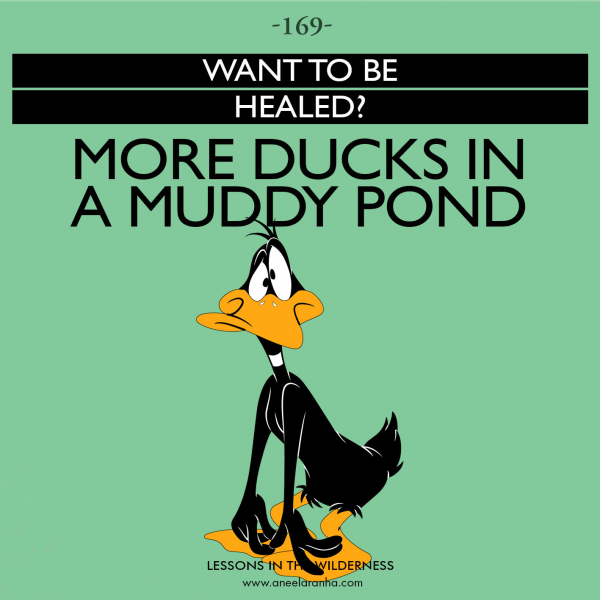 The story of Naaman told in 2 Kings 5 is fascinating, with every character in it, including the bit players, teaching us a thing or two. A girl kidnapped from her homeland to serve as a slave in Naaman's home teaches us selfless compassion as she tries to help her master. A soldier who risks his neck to tell his commander the right thing to do teaches us to be brave despite personal risk. A king who panics when faced with a formidable challenge teaches us that position doesn't give us unlimited power. A prophet teaches us that faith does.

And then, of course, there is the lesson to be learned from Naaman, who had to dip himself seven times in a dirty river to be cured of his leprosy. Sometimes we need to strip ourselves of all the external displays that hide our internal leprous state and be exposed in all our wretchedness so that God can cleanse us.

But there is another crucial lesson to be learned from this story. Why did the prophet Elisha tell Naaman to duck himself seven times in a muddy river instead of simply praying over the man? Jesus was also guilty of such unorthodoxy. One day, people brought a deaf and dumb man to Jesus, begging him to put his hand on him and heal him. Jesus did something very bizarre instead. He put his fingers into the man's ears. Then he spat and touched the man's tongue. And the man was healed. (See Mark 7:31-37). Why?

It is because God is God, and he will not heal us on our terms; he will heal us on his. Those who seek healing should make a note of this. We often expect God to heal us in the manner we want to be healed, ignoring what God tells us to do as something foolish or difficult or optional. Consequently, we don't receive the healing we seek.

Many years ago, I was about to start preaching a retreat when a lady came to me asking me to pray over her. She had a sickness for years, but God had not healed her, although she had been for several retreats before mine. I told her if she wanted to be healed, she had to do what God asked her to do during the retreat. This was my base-level retreat, which led participants through a three-step process of repentance, forgiveness, and surrender. The lady must have surely heard about the importance of all three steps before, but this time she sincerely repented for her sins, forgave those who hurt her, and surrendered her life the best she could. She walked out of the church totally healed.

So, figure out what God's terms are, if any, to heal you. He just might stretch out his hand and heal you as he has been known to do. Or he might tell you to take seven ducks in a muddy pond. Do it