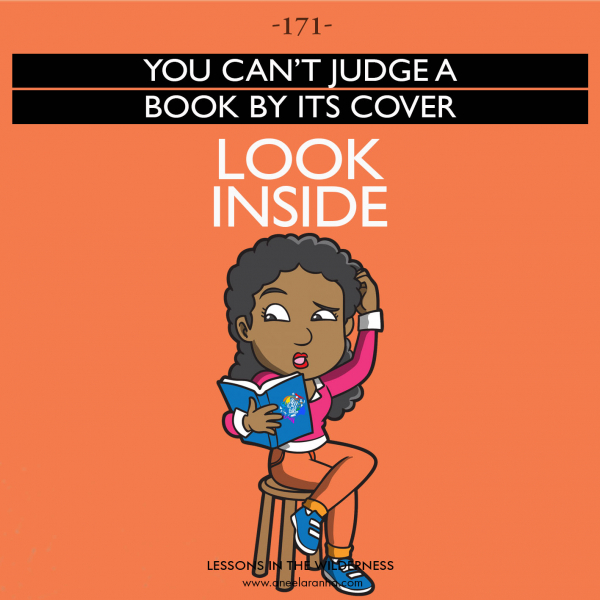 A businessman walked into his church one day. As he sat in one of the pews to pray, he noticed a woman cleaning the church. She swept and swabbed the floor, dusted and wiped down the pews, and picked up and collected the trash. He was very impressed, both by her industriousness and her cheerful demeanor. He thought he could improve her life by hiring her as a cleaner in his own firm. So, he approached her and gave her his card, asking her to contact him; he might have a job offer. She smiled, told him she appreciated his gesture, and pocketed the card.

After the service was over, the businessman was about to get into his car when he noticed the woman opening the door of a brand new Mercedes. "Whose car is that?" he asked. "Oh, mine," she replied. "I have three more just like this." And, flashing a dazzling smile, she got in her car and sped away.

The idiom "don't judge a book by its cover" is a metaphorical phrase that means one should not judge the worth or value of something by its outward appearance alone. This applies to everything, but perhaps most apt when it comes to people because we often judge a person by what we see. We then slot the ones we have judged favorably into one of the many pigeon-holes we have constructed while dumping the rest in a mental trash bin.

This is unfortunate because we miss out on knowing some great people, developing long-lasting friendships, and losing fantastic opportunities because we have gone by surface appearances. As an ideal example, consider the people who stereotyped Jesus. "Isn't this the carpenter?" they enquired (Mark 6:3), dismissing him and everything he had to say because what could one expect from a woodworker. What a loss for them!

On another occasion, Philip went to tell his friend Nathaniel about Jesus of Nazareth, whom he had just met. "Can anything good come from Nazareth?" Nathaniel scoffed, judging him even before seeing him based on where he came from! Fortunately for him, however, he followed Philip's advice to "come and see" and subsequently became a follower of Christ. Why? Because he had "opened the book and looked inside"!

The next time we meet somebody and realize we are judging them because of their dress, accent, color, looks — whatever — let us reserve our judgment until we know them better. We might end up becoming BFFs. That's best friends forever. Or getting married to them. It's been known to happen!