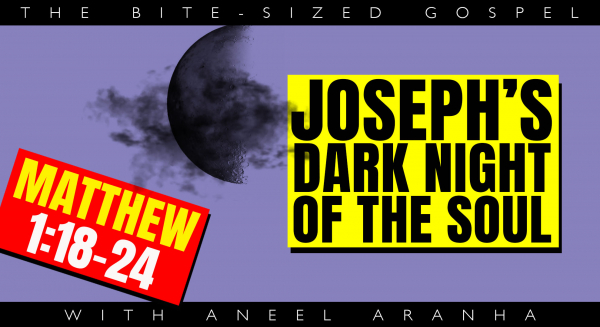 This is how the birth of Jesus the Messiah came about: His mother Mary was pledged to be married to Joseph, but before they came together, she was found to be pregnant through the Holy Spirit. Because Joseph her husband was faithful to the law, and yet did not want to expose her to public disgrace, he had in mind to divorce her quietly.

But after he had considered this, an angel of the Lord appeared to him in a dream and said, “Joseph son of David, do not be afraid to take Mary home as your wife, because what is conceived in her is from the Holy Spirit. She will give birth to a son, and you are to give him the name Jesus, because he will save his people from their sins.”

All this took place to fulfill what the Lord had said through the prophet: “The virgin will conceive and give birth to a son, and they will call him Immanuel” (which means “God with us”). When Joseph woke up, he did what the angel of the Lord had commanded him and took Mary home as his wife. But he did not consummate their marriage until she gave birth to a son. And he gave him the name Jesus.

One of the greatest heroes of the Bible is often relegated to the equivalent of a movie extra, which is a pity because we can learn some tremendous lessons from his life. I speak of Joseph, the earthly father of Jesus. Joseph features very little in the Bible—this is probably the longest passage about him—but it still reveals a lot about his character and nature. Like the temptation of Jesus in the desert, this little passage is so sterile in the telling that one often misses the enormous battle taking place in Joseph’s heart and mind.

I want us to understand this battle because it is relevant to our lives, especially to those who find it difficult to come to terms with the emotional upheavals we face. So, what’s the best way to understand? Be Joseph. For a few moments, put yourselves in Joseph’s shoes - or sandals. You are engaged to a woman, but she gets pregnant before she comes to live with you. What is the obvious conclusion? That she had an affair. What would you do?

Probably cancel the wedding and because of the hurt you feel you want to hurt her too. Isn’t that true? If you said no, good for you, but unfortunately, many of us become very vengeful when we are hurt. But Joseph is a decent man, and he wants to save her public disgrace, so he makes arrangements to divorce her quietly.

But then an angel appears, with some crazy story that the conception is by the Holy Spirit. First, you have to get your mind to accept this fact because it is weird. Then, you start to think about what people are going to say. “What? He got her pregnant before being married?” Or worse, “I heard the baby is not even his. Who do you think the father could be?” Even if nobody says anything, this is how the mind works. Do you now see the battle that Joseph would have gone through?

But after what would have been a very dark night, Joseph wakes up in the morning, and lets go of all the doubts that torment him, all the worries about what the neighbors will say, all the questions that fill his mind. He lets go of his inability to understand. He lets go of his fear. He lets go of who and what he is in society. And he clings to only one thing. His faith in God. And that God will take him through. And despite everything that follows, God does. And Joseph’s foster son saves humanity.