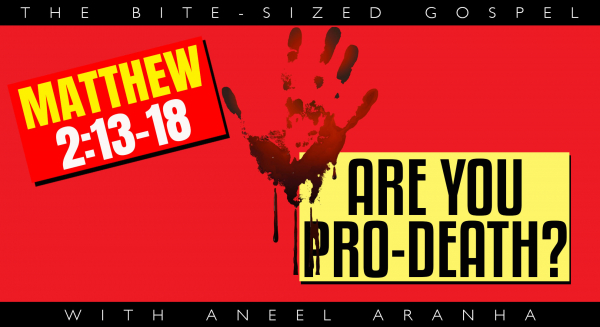 When (the wise men) had gone, an angel of the Lord appeared to Joseph in a dream. “Get up,” he said, “take the child and his mother and escape to Egypt. Stay there until I tell you, for Herod is going to search for the child to kill him.”
So he got up, took the child and his mother during the night and left for Egypt, where he stayed until the death of Herod. And so was fulfilled what the Lord had said through the prophet: “Out of Egypt I called my son.”
When Herod realized that he had been outwitted by the Magi, he was furious, and he gave orders to kill all the boys in Bethlehem and its vicinity who were two years old and under, in accordance with the time he had learned from the Magi. Then what was said through the prophet Jeremiah was fulfilled:
“A voice is heard in Ramah,
weeping and great mourning,
Rachel weeping for her children
and refusing to be comforted,
because they are no more.”

Many years ago, there lived a woman named Rachel. She was the wife of the patriarch Jacob. After her first child, she didn't conceive for the longest time. When she finally did, it was only to die giving birth to Benjamin (Genesis 35:18, 19). Rachel was buried at a place called Ramah, near Bethlehem.

A few years later, during the deportation of the Jewish people to Babylon, many of the Israelites were detained at Ramah where Rachel was buried. Those who were too old or too weak to make the journey to Babylon were killed. Rachel is said to have raised her head from her tomb and lamented the slaughter of the people. Two thousand years ago, she raised her head from the tomb again when King Herod slaughtered the children, and wept.

Does the slaughter of the children at Bethlehem disturb you? I am not sure it does. And let me tell you why. We have become desensitized to murder, just like we have become desensitized to poverty, social injustice, and so many other things. I suppose it is a survival mechanism. If we start shedding tears about every orphan who finds himself on the street, or every beggar who goes to sleep hungry, or every victim of a crazy killer, we will go mad.

But, perhaps we should GET mad, but angry mad. A few years ago, I spoke about the horror of abortion and I was gratified that a lot of people—many more than usual—watched the talk on YouTube, and hundreds shared it on Facebook. (There should be a link up there you can click on to watch it). Since then, many people told me that they had aborted their children, and not just one, but two or three, even four. And they didn’t know it was something they shouldn’t do.

How do Christian believers not know that aborting babies is committing murder? Can somebody please tell me that? If Christians can do this, is it any cause for surprise that the world kills them by the millions? And this is not an exaggerated figure. About 40-50 million babies will be killed this year by their own mothers. 40-50 million - that’s more than the population of most countries in the world. If you aren’t pro-life, then aren’t you pro-death?