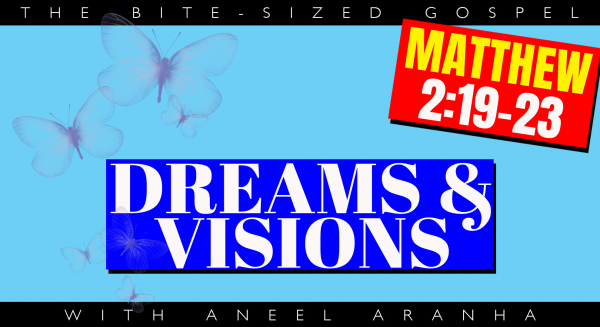 After Herod died, an angel of the Lord appeared in a dream to Joseph in Egypt and said, “Get up, take the child and his mother and go to the land of Israel, for those who were trying to take the child’s life are dead.”
So he got up, took the child and his mother and went to the land of Israel. But when he heard that Archelaus was reigning in Judea in place of his father Herod, he was afraid to go there. Having been warned in a dream, he withdrew to the district of Galilee, and he went and lived in a town called Nazareth. So was fulfilled what was said through the prophets, that he would be called a Nazarene.

In today’s reading, we have two instances of God speaking to Joseph in his dreams, which leads to the question: does God speak to us in our dreams too? The short answer is: yes. On the day of Pentecost, when God poured out his promised Holy Spirit upon the apostles, Peter spoke about a prophecy made by the prophet Joel, where he said: “‘In the last days, God says, I will pour out my Spirit on all people. Your young men will see visions, your old men will dream dreams” (see Acts 2:14-18).

Consequently, we can be sure that God will communicate with his people through visions and dreams. Peter, himself, would receive a vision a few months later, of a a large sheet being let down to earth from heaven. It contained all kinds of four-footed animals, as well as reptiles and birds. Then a voice told him, “Get up, Peter. Kill and eat.” He protested, saying they were unclean animals, but the voice told him not to call anything unclean that God had made clean. He had the same vision three times before the sheet was taken back to heaven. Peter eventually figured out the vision wasn’t dietary advice, but God telling him the gospel message was not just for the Jews but the Gentiles as well (see Acts 10:9-32).

Paul, too, had several visions, as did others, so we can see that God does convey messages through visions. However, we must realize that he does this when circumstances warrant, and it is to chosen people; not everyone. Not all the apostles are recorded as being given visions. It is the same thing with dreams. For most of us, dreams will be nothing more than the subconscious mind giving vent to fears, anxieties, or other emotions that the conscious mind has been dealing with earlier in the day or week. However, God does use the dream state to reveal things he wants us to address, or do. This is because the huge barrier of pride that prevents us from listening to him when we are awake falls when we go to sleep. On the occasions when God does communicate with us through dreams, he will make sure we get the message in one way or another. If we don’t get it, the dreams might repeat, or he will find another way to get his message across.

So, what’s the bottom line? God will use visions and dreams to communicate with chosen people for a specific purpose. If we are one of the people he wishes to communicate with, he will make his message abundantly clear. The rest of us might want to just read Scripture to see what God has to say to us!