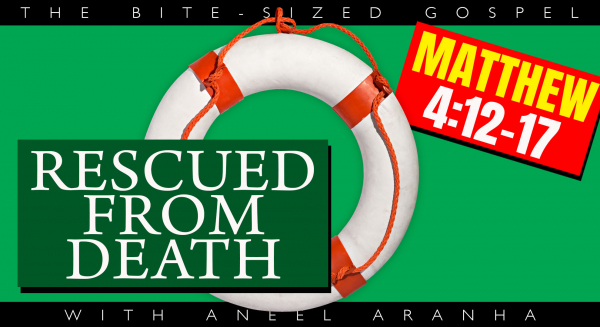 When Jesus heard that John had been put in prison, he withdrew to Galilee. Leaving Nazareth, he went and lived in Capernaum, which was by the lake in the area of Zebulun and Naphtali— to fulfill what was said through the prophet Isaiah:
“Land of Zebulun and land of Naphtali,
the Way of the Sea, beyond the Jordan,
Galilee of the Gentiles—
the people living in darkness
have seen a great light;
on those living in the land of the shadow of death
a light has dawned.”
From that time on Jesus began to preach, “Repent, for the kingdom of heaven has come near.”

In today’s passage, we find Jesus calling people to repentance. He wasn’t the first person to invite people to repent. Every prophet of note in the Old Testament called people to repentance, which typically involved two things. One: a turning away from sin to righteousness. Two: a renewed obedience to God’s will. Sackcloth and ashes were the recommended prescription as signs of repentance. In the New Testament, John the Baptist introduced a new note. “Repent,” he said, “for the kingdom of heaven has come near” (Matthew 3:2).

After John’s arrest, Jesus echoed the same message as we heard today. However, although his message was the same, the context was now different because the “kingdom of heaven” was contained in Jesus himself. And the signs were there to indicate this. He cured people “who were afflicted with various diseases and pains, demoniacs, epileptics, and paralytics,” showing them that the days of living in darkness were over. The light was here, just as the prophets of old had prophesied. As Jesus declared, “I have come into the world as a light, so that no one who believes in me should stay in darkness” (John 12:46).

Earlier, Jesus said that those who walk in the darkness do not know where they go (see John 12:35), which is so true. Most of us don’t know where we are going anymore, stumbling blindly as we journey through life. But this need not be so. As Peter says, we “are a chosen people, a royal priesthood, a holy nation, God’s special possession, that we may declare the praises of him who called us out of darkness into his wonderful light” (1 Peter 2:9). And as God’s people, we need to live like people of God. We need to abstain from the desire of the flesh that wage war against the soul.

As we all know, this isn’t easy. As Paul said (I paraphrase), “I do not understand what I do. For I do not do what I want to do, but I do what I hate” (Romans 7:15). Then he cries out, almost in desperation. “What a wretched man I am! Who will rescue me from this body that is subject to death?” (Romans 7:24). It is a cry we all echo, but fortunately, there is an answer to the question which Paul himself gives. “Thanks be to God, who delivers me through Jesus Christ our Lord!” (Romans 7:25).

This is what Jesus has come to deliver us from — not only the penalty of sin but the power of sin. All we need to do is stay yoked to Jesus (see Matthew 11:28-30) and allow ourselves to be led by the Holy Spirit (see Galatians 5:16). May God give us the grace to do both.