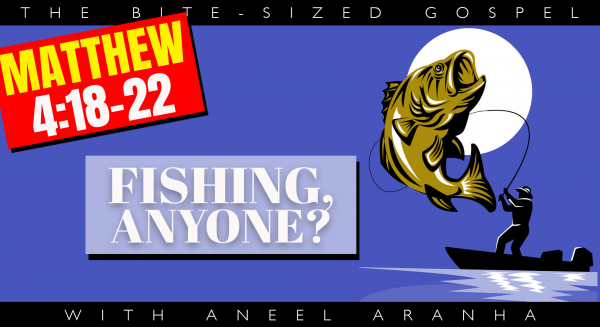 As Jesus was walking beside the Sea of Galilee, he saw two brothers, Simon called Peter and his brother Andrew. They were casting a net into the lake, for they were fishermen. “Come, follow me,” Jesus said, “and I will send you out to fish for people.” At once they left their nets and followed him.
Going on from there, he saw two other brothers, James son of Zebedee and his brother John. They were in a boat with their father Zebedee, preparing their nets. Jesus called them, and immediately they left the boat and their father and followed him.

Seven of the twelve men that Jesus chose to be his apostles are believed to be fishermen. In today’s passage, we see him calling four of them: Peter, Andrew, James, and John. Although fishing might have been a dominant profession in first-century Israel, the number of fishermen Jesus chose looks pretty disproportionate. Which leads to the question: why? Well, perhaps it is because fishermen have the kind of qualities that he was looking for. What might these be?

One quality is patience. Have you ever been fishing? Well, sometimes you can catch fish after fish in rapid succession; other times, you can just stand there — or sit there — with a rod in your hand for hours on end without getting so much as a bite! You need a lot of patience to catch fish. You also need a lot of patience to catch men! Sometimes, at the end of a crusade, you can have thousands of people accepting Jesus; other times, you might not bring a soul to Christ for months on end.

Another quality is persistence. On at least two occasions (that we know of), Peter and Andrew caught nothing (see Luke 5 and John 21). This is despite fishing all night. Can you imagine being at it all night and not catching a single fish? That speaks of patience, of course. But it also speaks of persistence because they kept at it until morning. Jesus bailed them out by giving them a catch so huge their nets began to break, but even if he hadn’t done this, they would have been out again the following evening! We need this persistence to evangelize, sticking to the task day after day!

A third quality is courage. Fishing by the side of a pond is a peaceful thing, but real fishing involves going out into deep waters. When a storm hits, it can be traumatic. Again, we find the apostles caught in numerous storms, and some were so severe even these seasoned fishermen were terrified. But this didn’t stop them from fishing. We need to have courage as well because we will be hit by storms too. Some of them might be big ones that threaten to destroy us. We should never be daunted.

Patience. Perseverance. Courage. Like the apostles, we, too, are called to be fishers of men. These are the qualities we need to have. Happy fishing!