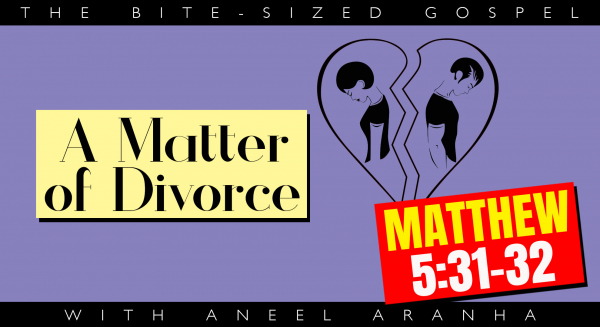 Ok, today we are going to talk about another subject that people don’t like to talk about: divorce. Studies have shown that the divorce rate has risen by 250% since 1960 and steadily rising despite the number of marriages falling. The most common reasons for divorce include lack of commitment, excessive arguing, marrying too young, unrealistic expectations, lack of equality in the relationship, and, of course, infidelity. The divorce rate among Christians is about par with the rest of the world, so let us briefly look at what God has to say about the subject..

One day the Pharisees went to Jesus wanting his opinion on the matter of divorce, because the Mosaic law allowed for it. Jesus was typically blunt. He said, “Moses permitted you to divorce your wives because your hearts were hard. But it was not like this from the beginning” (Matthew 19:8). God has never approved of divorce, but he recognized it happens, so he gave instructions to regulate it, mostly to protect the woman. She needed to be given a certificate of divorce.

This certificate had to do three things. One, state the reasons for the divorce. Two, ensure the woman was provided for financially. Three, allow her the freedom to remarry. In today’s passage Jesus speaks about this certificate, but he does one of his — “You have heard it said ... but I tell you” — statements, going straight to the heart of the matter, and declaring his final word on the subject. And it isn’t a pleasant final word. He says, “Certificate notwithstanding, I say to you that anyone who divorces his wife, except on the ground of unchastity, causes her to commit adultery; and whoever marries a divorced woman commits adultery.”

The only reason Jesus says is grounds for divorce is adultery. However, divorce is not *demanded* after adultery; it is only permitted. God’s way is always the way of forgiveness and reconciliation. So, why aren’t other reasons valid? It would help us to understand marriage from God’s perspective. Jesus said (I paraphrase): “Don’t you know that at the beginning God made man and woman, and said, ‘For this reason a man will leave his father and mother and be united to his wife; the two will become one flesh’? So they are no longer two, but one flesh. Therefore what God has joined together, let no one separate” (Matthew 19:4-6).

Having a Christian marriage means little if both partners don’t believe that God is joining them together as one flesh, which essentially means they become like one. If we understand, accept, and practice this truth, the other factors listed as reasons for divorce cease to matter. In fact, they may cease to exist. For a deeper understanding, please read 1 Corinthians 7.