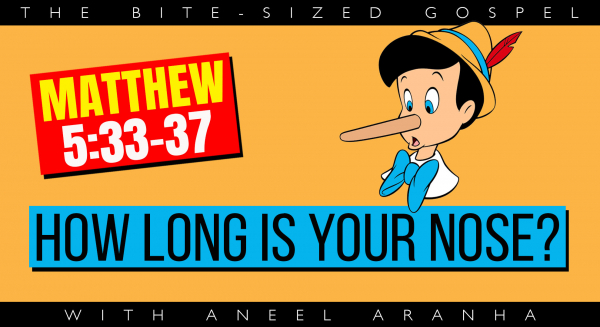 Jesus said: “Again, you have heard that it was said to the people long ago, ‘Do not break your oath, but fulfill to the Lord the vows you have made.’ But I tell you, do not swear an oath at all: either by heaven, for it is God’s throne; or by the earth, for it is his footstool; or by Jerusalem, for it is the city of the Great King. And do not swear by your head, for you cannot make even one hair white or black. All you need to say is simply ‘Yes’ or ‘No’; anything beyond this comes from the evil one.

"What is truth?" Pilate famously asked Jesus in their conversation before the Roman governor had him flogged. If Pilate found the question difficult to answer, we find it almost impossible in these days of depravity. This is because very few people believe that moral truth is absolute. For most of us, the truth is a matter of expedience - whatever is convenient at the time.

So we lie. This is bad enough, except sometimes we try to give our lies credibility by making oaths to back them up. For the Pharisees, it was the order of the day. They made impressive statements, often in the name of heaven, the earth, Jerusalem, or even their own heads, as though they had ownership over them all.

We are often guilty of the same. When I was growing up, we used to make promises in God's name with a declaration that was as absurd as it was grammatical nonsense, "God promise," we'd say. Or we'd swear on our mother's name. Every culture has its own variations, like the famous "pinky promise," where two people making the promise entwine their pinky fingers. Ever done that?

Jesus tells us to stop all this. The Hebrew Bible approved of some oaths and vows (as in Numbers 5:19-22; 6:2), but Jesus' point was not that oaths were evil so much as our motivations in making them. And why call upon God to stand witness for us? We shouldn't be taking his name in vain, to begin with. Let our yes be yes, he says. Simply tell the truth.

The world lacks people of integrity today. It would be wonderful if we Christians could be men and women of integrity, people of their word. How do we begin? Like everything, with the desire to be honest. Then by asking God for his grace. And then some practice. And, oh yeah, you can read the story of Pinocchio.