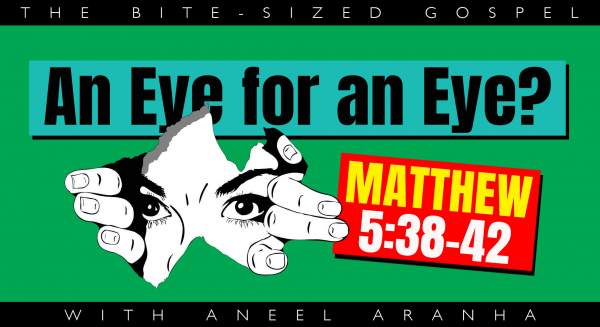 Jesus said: “You have heard that it was said, ‘Eye for eye, and tooth for tooth.’ But I tell you, do not resist an evil person. If anyone slaps you on the right cheek, turn to them the other cheek also. And if anyone wants to sue you and take your shirt, hand over your coat as well. If anyone forces you to go one mile, go with them two miles. Give to the one who asks you, and do not turn away from the one who wants to borrow from you.

When Jesus was quoting that part about “an eye for an eye and a tooth for a tooth,” he was actually quoting Scripture, and we can find the phrase (or something similar) in Exodus, Leviticus, and Deuteronomy. People often point to this as saying that God allowed for vendetta, but that isn’t true. This phrase, which is *not* to be taken literally, is based on the principle of fair justice. It essentially means that the punishment should correspond in kind and degree to the injury.

Let me explain. It is the rare human being who, when hurt, does not desire vengeance. Given the opportunity, he will often inflict greater damage than has been suffered. “You killed one of mine; now I will kill ten of yours.” You see this in the movies all the time. So, to prevent excessive punishment at the hands of an avenging individual (or government), the “eye-for-an-eye” policy ensures that the punishment should fit the crime.

Now, this is justice. But like Gandhi, who was very inspired by Jesus, said, “An eye for an eye will only make the whole world blind.” And that is precisely what is happening to the world. A desire for vengeance is resulting in a vicious unending spiral of pain that never seems to end because everyone is reacting only in hate. Hurt continues to be inflicted, and old wounds get deeper while new wounds are constantly being gouged.

How does it end? It will end only if one party says, “Enough. You hurt me if you want; I won’t hurt back. No matter the provocation.” And then, if this person can follow through on his decision, the cycle of unending pain might cease. It isn’t easy because sometimes the other person goes on hitting and hitting, often under the belt, and you want to hit back just to make him stop. Not reacting can take everything out of you because a part of you keeps crying: foul!

I have found myself tested on this, and finally, the only way I managed to succeed (kind of!) was to think of Jesus’ Passion and how he didn’t retaliate. In the Garden of Gethsemane, when Peter raised his sword to defend him, Jesus rebuked him harshly. “Put your sword away, Peter. If I wanted, I could have twelve legions of angels to defend me? But this is how it should be. (See John 18:11, Matthew 26:52).

He did that for us. Let us do the same for him.