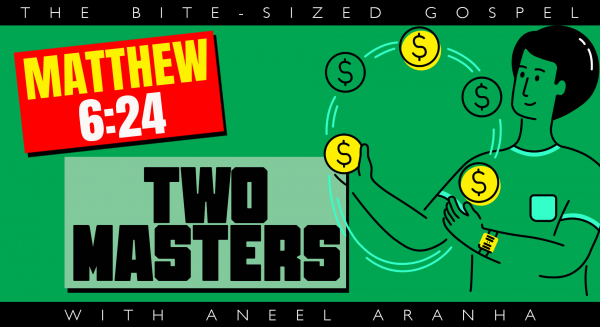 Jesus said: “No one can serve two masters. Either you will hate the one and love the other, or you will be devoted to the one and despise the other. You cannot serve both God and money.”

We are often faced with a choice between two desirable things. Our typical reaction is to say: I want both. At times this isn't a problem. If you want to order both risotto and pasta, go for it. However, this can be a problem if we want the things of heaven *and* the things of the world because they are usually incompatible. One such thing is money.

Matthew tells of a rich young man who once asked Jesus what he needed to do to gain eternal life. "Well," Jesus answered. "You know the law. 'Do not murder, do not commit adultery, do not steal, do not give false testimony, honor your father and mother,' and 'love your neighbor as yourself.' Do these things and you got it made."

"I do all these things," the young man said, rather self-righteously. "What else do I need to do?" Jesus told him: "If you want to be perfect, go, sell your possessions and give to the poor, and you will have treasure in heaven. Then come, follow me." When the young man heard this, he went away sad because he had great wealth and couldn't bear to give it up.

The problem isn't money; the problem is our attachment to it. We can become slaves to it, which is why Jesus says we cannot serve God and money. The Revised Standard Version uses the word "mammon" instead of "money," which Merriam-Webster defines as "material wealth or possessions especially as having a debasing influence."

We need money to survive in this world, but let us not be dependent on it. Let us depend on God, instead, who will provide us with everything we need.