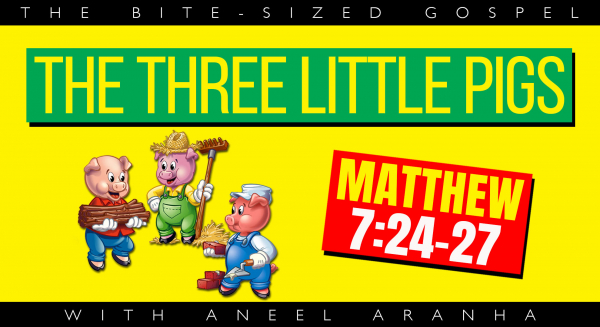 Now, I know the moral of the fable is evident to everybody who reads it. To understand Jesus’ teaching today, all we have to do is think of The Three Little Pigs, who represent us today, and of the Big Bad Wolf, who represents the devil. Peter advises us to “be alert and sober at all times because our enemy the devil prowls about like a roaring lion looking for someone to devour” (1 Peter 5:8). He’s huffing, and he’s puffing, trying to blow our houses down. And if our houses are not solid, they will fall down, and he will devour us. So how do we make our houses strong? By building them on the rock.

What does that mean? Jesus explains: “Everyone who hears these words of mine and acts on them will be like a wise man who built his house on the rock” (Matthew 7:24). Listening to and obeying God’s word is building our houses on rock. James expounds: Do not merely listen to the word, and so deceive yourselves. Do what it says. Anyone who listens to the word but does not do what it says is like someone who looks at his face in a mirror and, after looking at himself, goes away and forgets what he looks like. But whoever looks intently into the perfect law that gives freedom, and continues in it—not forgetting what they have heard, but doing it—they will be blessed in what they do” (James 1:22-25).

The wolf is at the door. How strong is your house?